A Bit of a Controversary

Continuing with my visit to view the Texas art.

Mr. M, our gracious host took us from room to room to view his vast collection of paintings and sculptures all done by Texas artists. 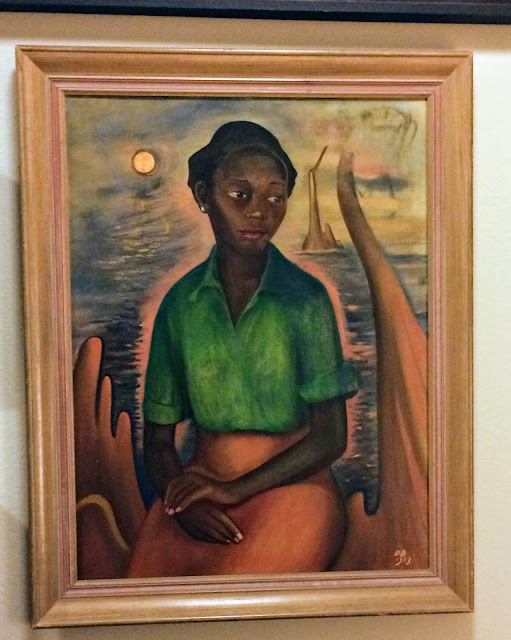 This painting by Don Brown (1899-1958) who was from what we call the Piney Woods of east Texas is titled Swamp Girl, but I have also seen it called Ruth. Brown painted numerous works depicting the  swampy waters and landscapes of Louisiana and north east Texas. Caddo Lake near where he grew up in Marshall, Texas was a favorite subject. A celebrated regional artist, his paintings are in museums across the U.S. and also in Paris, Copenhagen, and Warsaw. He studied in New York in the early 20s and moved on to Paris in 1923. The early 50's found him as head of an art department in a small college in Louisiana...and that is where I think it gets interesting.

Ruth was a janitor at the small college where Brown taught. You must remember this was way back in the early 50's, a time when racism was the norm. Hopefully we have come a long way since then. Anyway, the staff at the college was shocked that Don Brown, a white man would paint such a painting and on top of that, hang it in his office. What is wrong with this painting? According to his superiors she wasn't being depicted as the janitor, but to their horror almost being posed as an elegant lady in somewhat  the same position of Leonardo da Vinci's Mona Lisa. I am not sure how that controversy ended, but word has it that of all of Brown’s paintings he considered this one of his best works.