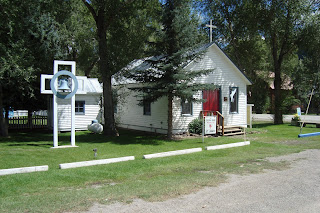 I have shown you the inside of our smallest church in Lake City , Co. This is the outside. The building was originally built to house a carpenters shop, until it was purchased by the St. James Episcopal congregation in 1876. The storage shed was added in 2010...but they still have something important that is missing...a restroom! 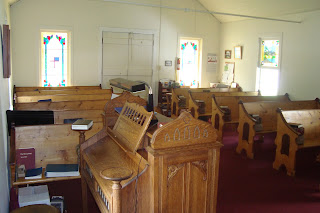 This is the third in a series about our tiny Episcopal church in Lake City, Co. The congregation is very proud of their nineteenth century Estey reed organ that has been in use all of these years. 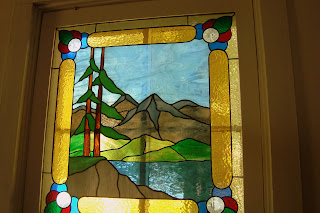 Another shot from the tiny church (yesterdays post) . I think this stained glass is very apropos, with such a pretty mountain scene. The Church founded in 1876 has the original pine pews...and and unusual reed organ...which I will show you tomorrow. 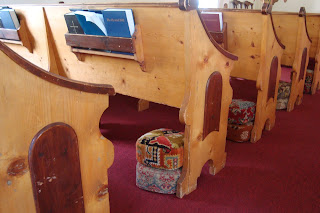 We have several tiny churchs all built in the 1870's. This little church only holds 60 people. Such colorful kneelers tucked under the pews.. 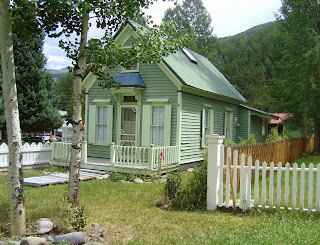 I think this little house is darling. It's what we call a "shotgun house". You could shoot a shotgun at the front door and the bullet would go straight through and out the back door!

When Lake city was drawn up in 1875 the town lots were 100ft deep but only 25 feet wide, so we have several of these long skinny houses.

Built in 1882 this home has only had a handfull of owners. One a John Swanson was a confederate soldier in the civil war. Two owners later the home was sold to Wm Hunt a union soldier in the same war who participated in Sherman's march to the sea! 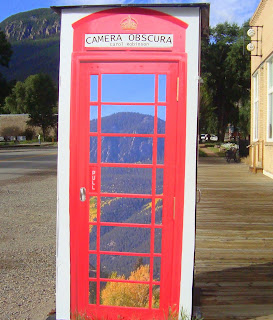 This interesting English looking phone booth appeared downtown this summer. It is actually a camera obscura, which is an optical device that pojects an image of an external scene through a small whole onto a screen. The image actually is displayed upside down. This type of device led to the invention of photography! 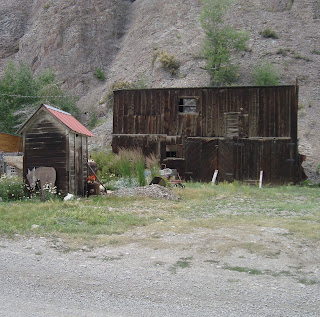 Dr. Cummings was not a folk hero..but a real doctor in Lake City at the end of the 19th century and the beginning of the 20th. He rode around in his buggy treating folks during the smallpox empidemic of 1899 and again when the swine flu hit town in 1918, saving countless lives. 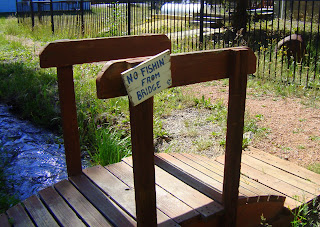 Back in the day (late nineteenth century) water was diverted off of Henson Creek into little canals running on both sides of the residential streets here in Lake City. This water was used for irrgation of gardens and household use. Mary Beam would fill a pot for soup not knowing that old man Vickers, upstream, had just washed the spittoons from his saloon. This little walking bridge crosses one of the few remaining canals. 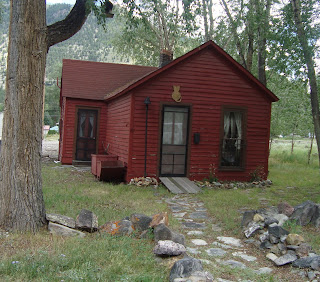 Cat house is another name for a brothel. Bluff street is the first street you come to in Lake City coming down from where the silver mines use to be. It naturally was the place where the painted ladies ran their houses. Hell's acre as the rest of the town referred to it. There aren't any signs of what went on then, with the exception of this one house. The present owners displayed their house numbers in a playful little way...notice the cat? 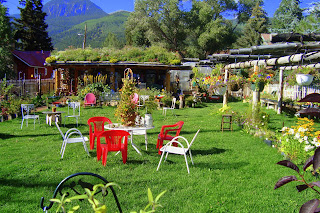 We have a darling little nursery/gift shop in town with a planted roof top. It is so sweet that it looks like something out of a Fairy Tale! 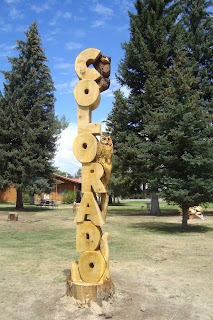 Gunnison, CO is the nearest city of any size, which is where we go weekly to the grocery store. When a tree dies in the beautiful park there...they simply carve it into something interesting. 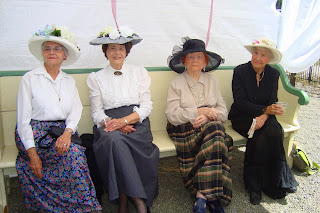 We have a social time outside before the ladies can enter the tearoom. I suggested putting the old antique pew under the shade tent...as some of our "older" ladies might like to sit down. I love it when I am right!

The Mystery of Irma Vep 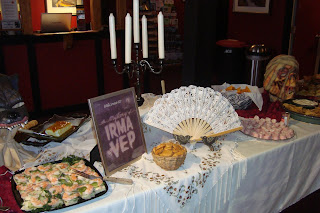 Once a year...we trek over the mountain and hold a reception for an opening night at The Creede Repertory Theater. We had fun decorating for the crazy farce...The Mystery of Irma Vep. 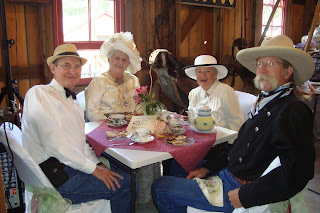 We did have a couple of men who left their macho at the gate...and joined us for tea. Okay so one was the official photographer. We are hoping they will pass the word...and more men will join us next year! 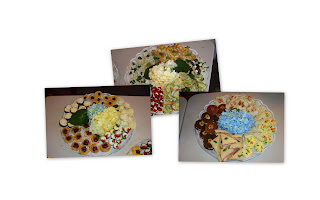 What is a tea party without the food? We only have four women cooking for this event...and remember the grocery store is 110 miles round-trip. So everyone is amazed at the beautiful array of dainty choices! 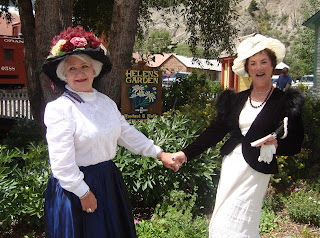 Yesterdays Back in Thyme Tea benefiting Helen's Garden was the place to be in Lake City, Colorado 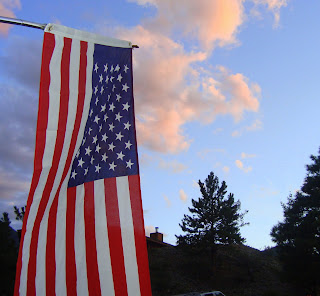 I love when we have our pink and blue sunsets! 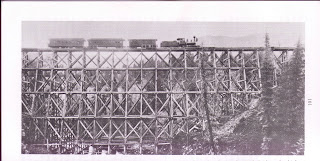 Lake City, Co. though very remote in the late 1800's ,was a bustling mining town. So much so that Denver & Rio Grande Narrow Gauge Railroad finished a track here in 1889. Spanning the Lake Fork of the Gunnison River seven miles north of lake city was the railroad's highest bridge..spanning 800 ft across the river at a height of 124 feet...it was a sight to behold.

The railroad pulled out of Lake City in 1933 and the bridge was demolished. Many of the cabins in Lake City were built from this wood. 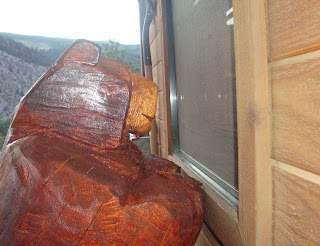 We have a fairly large population of bears here in Lake City...and most everyone loves that. We have to be careful with our garbage and even our bird feeders though. They say a fed bear is a dead bear. They learn very quickly where they get fed and even teach that to their cubs. Keeping them wild and safe is our goal around here. This is my friend Ann's new pet. Little Katie Ewart and her husband Roland (center) were cooks in the silver mines back around 1901. Katie was from Denmark and Roland from England. Roland died of swine flu (1918) leaving Katie in this tiny mtn town with five kids to feed. Knowing how to salt and dry fish (a knowledge she brought with her from Denmark)) was a big help.

I am friends with her granddaughter Dana.... 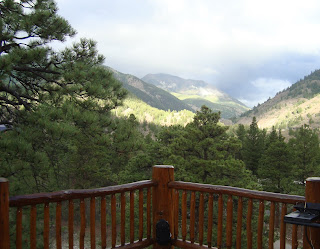 Getting an accurate weather forecast for our little corner of Colorado is almost impossible. But, I get a little warning. Most of the summer storms approach from the southwest. I just have to look in the direction of this pass and I can see it coming! 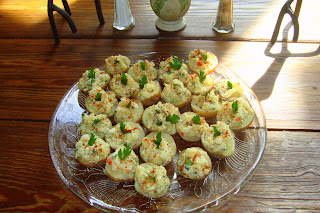 There are a lot of good cooks who summer here. But, what you really need is a stack of appetizer recipes. This is one I tried recently that seemed to be a big hit. Individual potato salads in a scooped out cooked red potato. 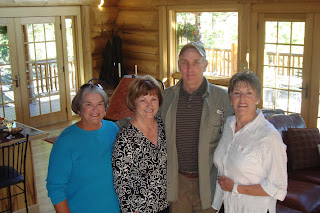 My summer home is over 1,000 miles from my home town. But, three members of my graduating class spend their summers here...and three more come for at least a month. The gal in blue just came for three days..but we sure had fun catching up! And I am not going to say what year we graduated!!! 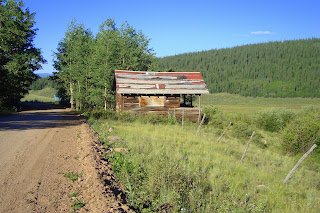 High above Lake City, at over 11,000 ft., runs Cebolla Creek. Beavers have put a lot of work into their dams causing the creek to have a cascading effect as in meanders slightly down hill. It's not unusual to see a moose feeding in the still waters of one of these ponds. There is a dirt road that parallels the creek and I am amazed at the changes in the topography in the thirty mile jaunt from beginning to end. A favorite spot is where the meadow opens up...and sitting there for who knows how many years, is this sweet little cabin. 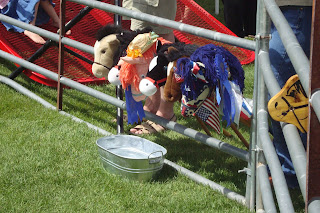 A fun event for all ages is our Stick Horse Rodeo!
Posted by Janey and Co. at 6:32 AM 1 comment: 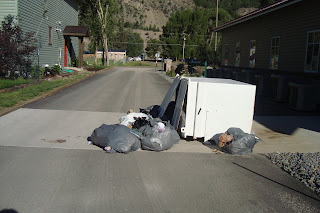 As you can see...We have very strong bears around here...Makes me wonder why I put in dainty little French doors!
Posted by Janey and Co. at 9:02 AM No comments: 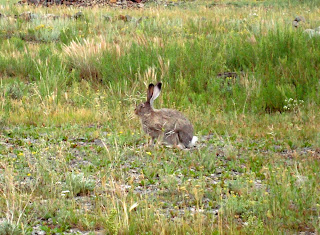 We have lots of little bunnies hopping around up here. Always happy to see that because it means a mountain lion has not been scouting around.
This rabbit looks like a TEXAS Jack-Rabbit to me. Maybe it's so hot in Texas he came hopping up?
Posted by Janey and Co. at 12:35 PM 3 comments: 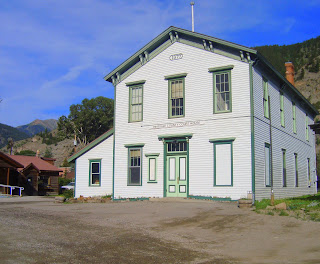 Our court house (Hinsdale County) is the oldest court house still in operation in the state. It has a wonderful spiral staircase inside. Alfred Packer...accused of cannibalism was tried here in 1877.
Posted by Janey and Co. at 11:47 AM No comments:

Back in Thyme Tea 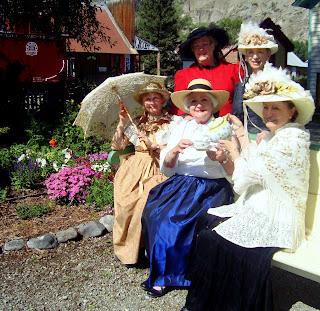 We don't all dress like this up here. This is the Back in Thyme Tea Committee posing for a picture for the newspaper...reminding people to get their tickets for the tea...benefiting our Victorian Garden at the museum
Posted by Janey and Co. at 10:07 PM No comments: 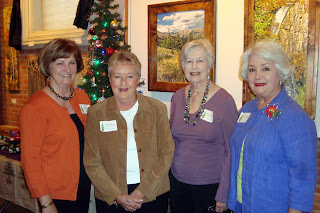 Christmas in July is an annual fundraiser for our little library. Gosh it's a lot of fun. We each pay the price of a new book. The library wraps them in Christmas paper. We draw numbers and unwrap one...or steal someones ...for the right to read it first. A good time was had by all!
Posted by Janey and Co. at 7:43 AM 1 comment: