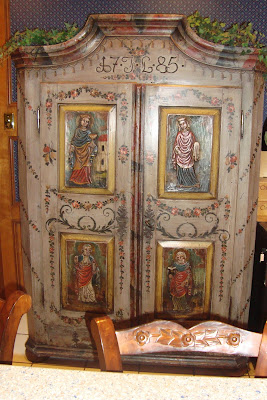 At our friends the other night, I noticed a large painted chest in her kitchen. It had a date of 1785 on it. I figured it was a reproduction, until I was told they had shipped it from Switzerland. I don't know much about antique furniture or painted furniture from the eighteenth century. But, I may ask more questions about this chest or research it. 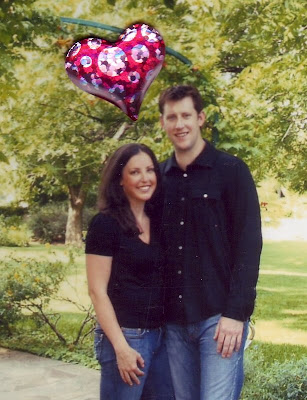 Katy is daughter #5. She lives in Chicago with her very tall handsome husband Joe
and my darling new granddaughter Hannah Jane

Love you All! Mom

Last night we went to a graduation party honoring our little friend Alli, who is a December graduate of Texas Tech University and one of  this cities newest Kindergarten Teachers.

We've known Alli since she was a baby in arms, and we are very proud of this young lady who is going to make a wonderful caring teacher. Congrats to Alli!

Every year it seems, I feel the need to Pitch and Toss....another way of saying cleaning out closets, drawers etc, and ridding yourself of unwanted personal belongings.. Despite the fact, that the dictionary defines it as a game.. I especially get the urge, when a new year is approaching. This year, I am doing major tossing! (actually donating). I had a good laugh when I came upon this guy: 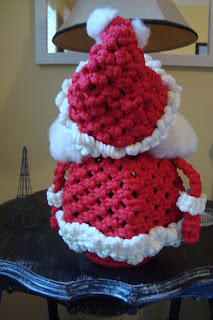 Some of you may remember this craze from the early 1970's. It was called macrame. Well, my first Mother in Law (that sounds awful, like I had a first, second and third, more on that later) was really really into it.!

This was a Christmas gift, long about '72 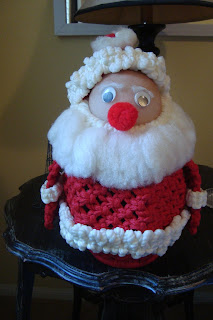 I bet you didn't need all of those mug shots to recognize Old Saint Nick. He somehow made the cut in previous pitching and tossing escapades....unlike the macrame hanging basket  holders. Don't worry, I will save him for one of my daughters.....and I know which one. Isn't funny how  kids can be so different? More on that later too? 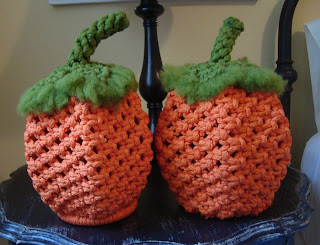 Hopefully she'll want these as well? Ya never know what I might find! Now, was there a rabbit ?....Janey

*Pitching and tossing is actually recreation for a Virgo like myself... 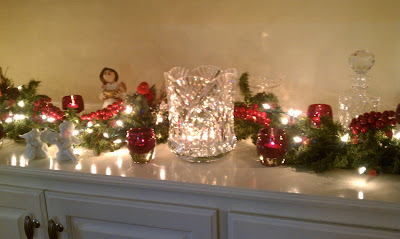 click on picture to enlarge
On Christmas night, my family all gathered on a snowy evening at my sister Nancy's home for a casual dinner. It was  wonderful to see everyone, and I loved her decorations, especially this ledge that held a display of crystal rose bowls and an assortment of matching candles. Yesterday, we traveled back to Houston. The highway was crowded, but we had a nice drive and a safe trip. Are you travelling this holiday season? If so stay safe! 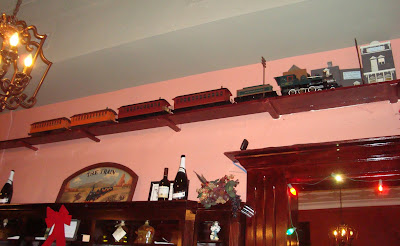 Last night we went to a small Italian restaurant with one of my sisters and her husband.. The atmosphere was cozy, the food terrific and this little train kept chugging around our heads on a track near the ceiling! 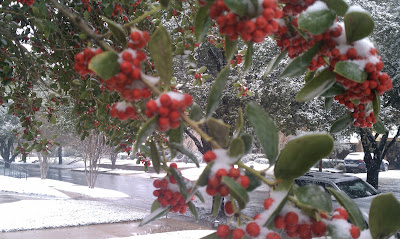 This may not look like an unusual scene to you, but it is to us. We had a white Christmas in Ft. Worth, TX.
The snow certainly added to the wonderful day. What was your weather like? 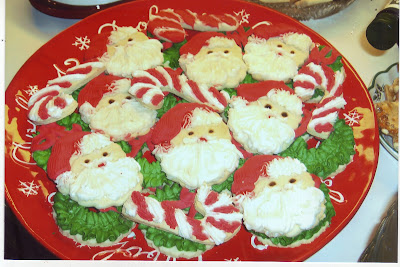 I hope today you are spending with family and friends. We are in  Ft. Worth to be with my sisters and their families. These cookies were made by my multi- talented niece Kristin, who in addition to being a mother, wife and teacher is a creative cook.
Happy Holidays to all of my Blog Friends! 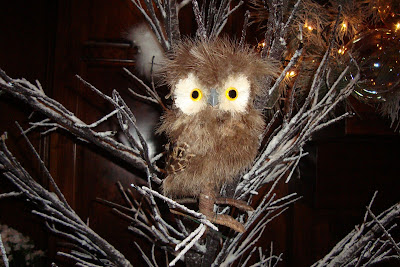 The decorations at the golf club are all the lodge look. Furry creatures of all sizes are everywhere.. This one seemed to be watching me eat my dinner!
Today is Christmas Eve. We are going to a friend's open house (party) and then early tomorrow, we will drive north to Ft. Worth to get together for a dinner, Christmas night, with all four of my sisters and their families.. What are your plans this Holiday Season? Have fun and be safe....Janey

What Are The Chances? 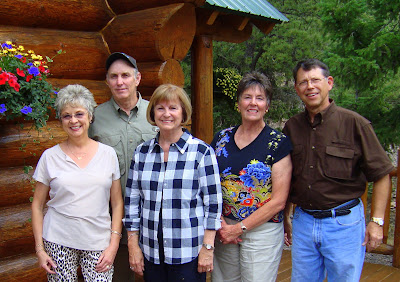 This picture was taken at my Colorado house, where Tom and I live in the summer.

Lake City, Colorado is a tiny town of four hundred people that swells to over four times that number when we summer folk arrive. I grew up in what I considered a small town in Texas. Sherman is in north Texas and had a population of about 30,000. We had one high school, when I lived there, and most everyone knew each other.

You can imagine my surprise when one summer, I discovered four other people in my little Colorado town from Sherman, not just from Sherman, but from my actual high school graduating class! The group above had not seen each other for 40 years!
So, how did we run into each other? The two other women, Risa and Ruth, who lived in different states, had started exchanging Christmas cards. Ruth mentioned that they had a cabin in Lake City, Co. Risa was amazed as she and her husband spend a month there every summer. They of course got together that summer, when they arrived. They were sitting in a local restaurant looking through our high school yearbook, when Mike (back row left) walked up and said, "ladies can I show you something?" He flipped the page and said, "that's me". Mike also has a cabin in town. Which leaves Chris on the right. Chris had become a Facebook friend of mine and he had posted a picture of our little town...saying he summers in the area. Back to Risa and Ruth. The day after their lunch, they decided to take the Victorian Home Tour, a fundraiser for the little museum . Well, you guessed it. I was a hostess on the home tour. When they started discussing the Victorian homes in their hometown, I asked "where is that"?

To make a long story short..I invited them all to my house one day for lunch! We sure had fun reminiscing!

A still life of my day yesterday....actually all week. I don't usually get sick, so this has really knocked the air out of my sails. I have been to the doctor, and it is not the flu, just a nasty cold. I have been reading a good book on my iPad too. Has anyone read Kitchen House? Achooo.... 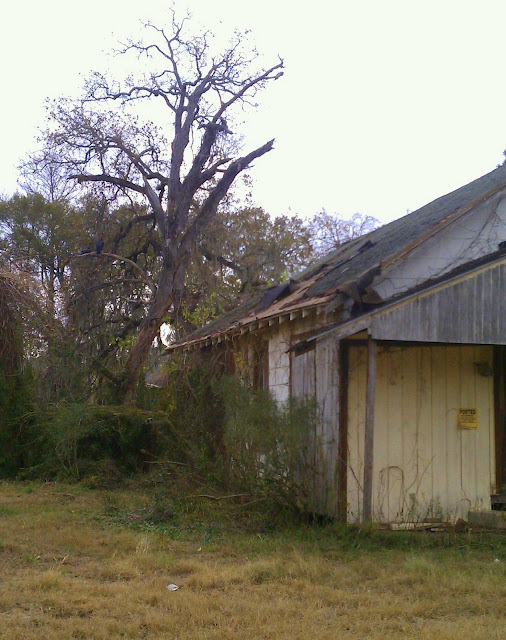 Driving along yesterday, not far from home, we saw many beautiful homes and yards all decorated for the holidays. Then this came up out of now where. looking a bit like a movie set for a scary movie. Seems to be an abandoned home and property. I didn't get a very good shot, but if you look closely there were even two vultures perched in the tree. An eyesore....but for some strange reason, I found it interesting? 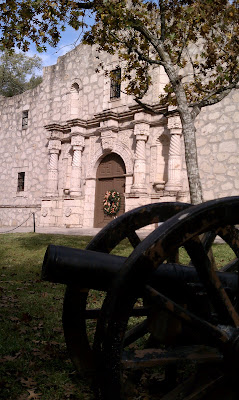 Most people would answer San Antonio...because pictured above is surely the Alamo?Right? Looking twice wouldn't really help, because it is an exact replica....in Cypress Texas, just 20 min from my house. 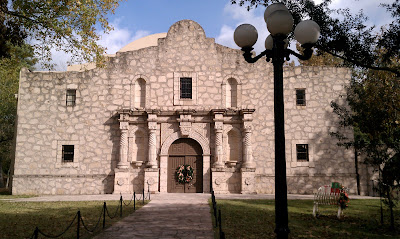 Built in 1987 by chairman of Kwik Kopy Corp. to the dismay of The Republic of Texas, a non profit organization, who manages the state-owned Alamo. That organization feels like the Alamo is a shrine to the men that gave their lives there for Texas Independence. The Kwik Kopy executive, and avid historian, wanted to add the structure to his  campus training center on a 23 acre facility in Cypress. Which by the way, he did. 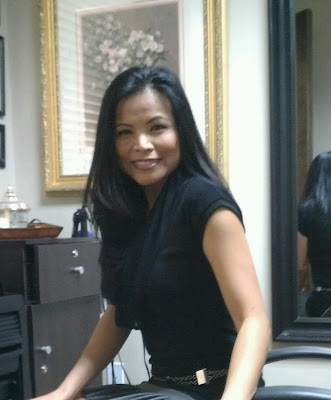 Well, here is an important person in my life. My hair dresser. She has been cutting my hair for at least ten years now. I had been trying shops all over the area, only going in for a cut about once a month. The second time I went here, she called me by name and remembered the conversation we had had on the last visit. In a town so large, there is something comforting about someone knowing your name.
Posted by Janey and Co. at 5:43 AM 4 comments: 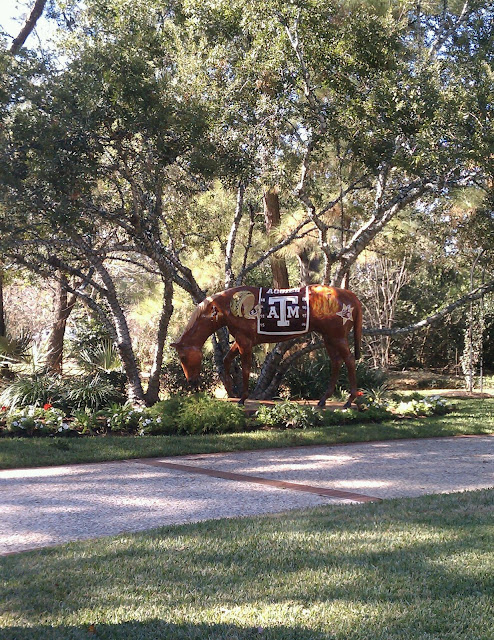 One of our neighbors has a life sized statue of a horse in their front yard. It is apparent to anyone driving by, that they are graduates of Texas A and M University, a fiercely loyal group of alumni..

They had reason to celebrate this year when the Heisman Trophy was handed out. The Heisman, a yearly award to the most outstanding collegiate football player (in the U.S.), was awarded to their quarterback Johnny Manziel a freshman ...and the first freshman in the history of the award!

Our weather was beautiful yesterday....but it doesn't feel like Christmas. 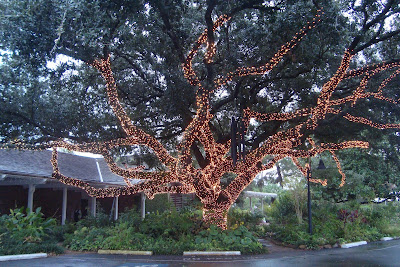 This is a common thing to do to a Live Oak Tree in Texas at Christmas.....have it wrapped in Christmas lights. We have a big Live Oak in our front yard, but it is not wrapped like this...not because we don't like it  but because it's around $1000.00 to have it done! 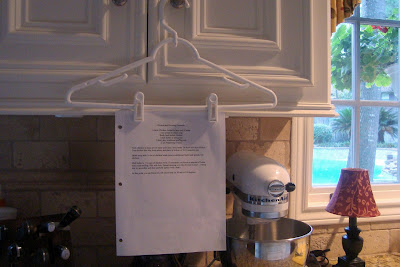 I can't take credit for this idea. I saw it I think on Facebook. Anyway, many of my recipes are in a loose leaf notebook. Hanging the recipe on skirt hanger gets it off the counter....and puts it at eye level. 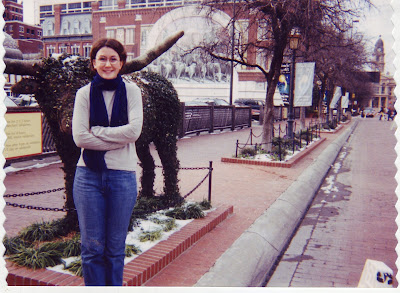 My husband and I have hosted several exchange students over the years. I would like you to meet Marina,  one of my favorites. She came to us from Limoges, France  We found her sweet, thoughtful, artistic and  she had the cutest sense of humor. I will forever  consider her one of my daughters.
Marina is pictured here on a frosty Feb. day. She didn't have school that Monday and I drove her up to see Fort Worth, Texas.

Surprising to me just how much she looks like a blogger Veronique, who writes the blog. French Girl in Seattle!

I post this with a heavy heart. My prayers are with the families in Newtown, Conn.

On My Morning Trail 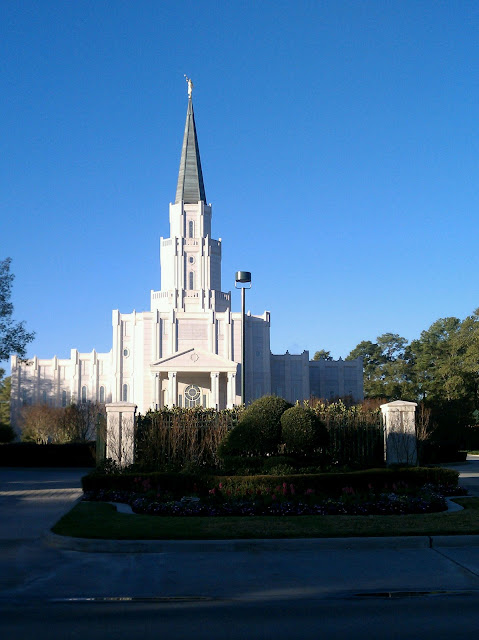 On my way to the gym I pass a Mormon Temple;  illuminated here by the morning sun. Completed  in the year 2000,  we were actually able to tour it ( being non Mormons) before it was blessed.


I am not familiar with the Mormon religion...and knew nothing about the tradition of  ( life sized) oxen statues supporting the baptismal pond. I thought, how nice, since the temple is in Texas... they used a Texas theme, and added long horned steers. I wondered why, when I commented on this during the tour, my husband answered me with a SHHHH!

Dust Off The Apron 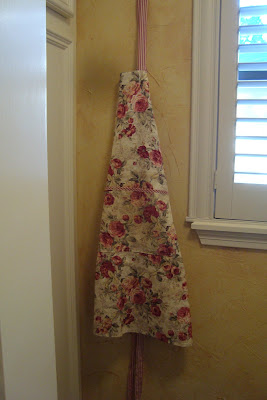 It's time to dust off the apron 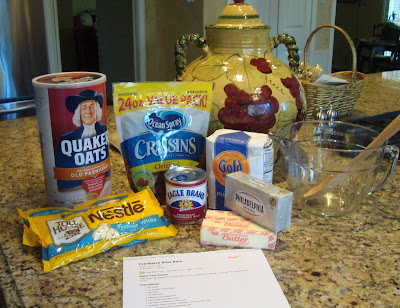 Get out the ingredients 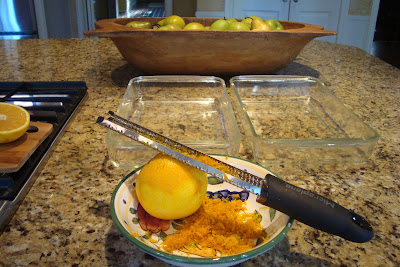 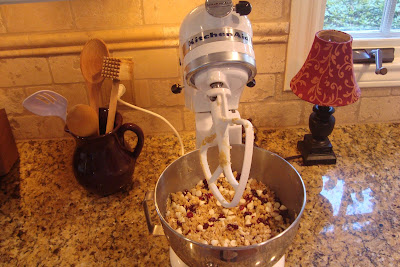 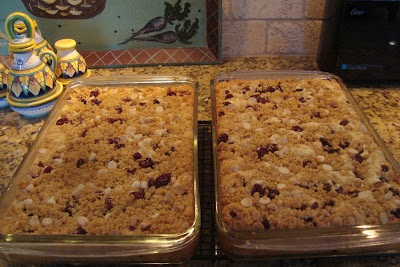 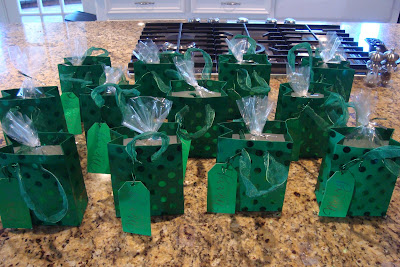 and all packaged up to hand out to friends, at a Christmas dinner party.
Cranberries, oranges and chocolate in the oven sure make this house smell sweet!
I hope that you are enjoying what ever you are doing this holiday season!
Happy Holidays!

Having computer problems at home. This is coming to you from an early morning coffee shop. Wish I had brought along a cranberry bliss bar! 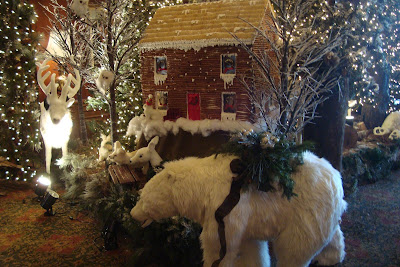 I had lunch with old friends yesterday at a local golf club that is  famous for their holiday decorations. This year's theme seemed to be a lodge look.  I liked it a lot, maybe because I have a log cabin in the mountains.....my friends, not so much.