Well folks...it’s been over two months and my shoulder is not any better. 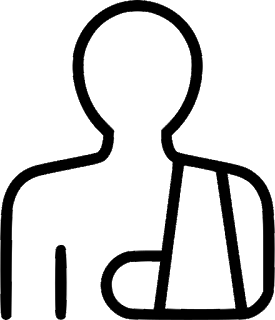 Won’t go into a lot of medical details...Hate it when seniors talk about nothing but their health!

The short of it is, I need a shoulder replacement. ...and that can’t even be done quickly. They tell me it will be into April. So I guess then I won’t be posting much, but the good news is I will have time to finally catch up on your blogs!

Believe it or not I am hosting a party tonight. Hated to cancel because of my silly pain....besides that is what’s nice about having family nearby....my sister is coming over to help. I may even take a picture or two!
Don’t give up on me!
Janey
Posted by Janey and Co. at 1:28 PM 7 comments:

I am a member of an organization called Lecture Foundation which brings to Ft. Worth interesting speakers on all sorts of subjects. 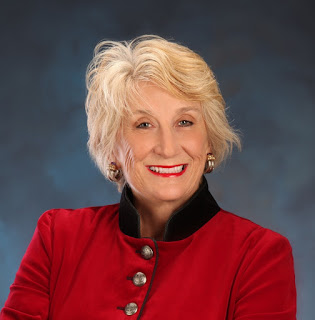 Meet Kathryn Childers. Kathryn was one of the first five female Secret Service Agents way back in 1970. You can read more about Kathryn HERE

She was chosen because she was so well rounded. She could shoot a gun, winning trophies in a rifle club in high school. She was also a champion skier, could  play tennis and I would suspect excellent at anything she tried.

I so enjoyed her talk about how exciting being on the international stage  was for a girl from a small town in the Colorado Rockies. She guarded the president's daughters, visiting dignitaries of the likes of Golda Meir and the Queen of Spain. She told us humorous stories about going to her first state dinner in her sorority formal (the only fancy dress she owned) and stopping along the way at a department store to buy a pretty purse with the main requirement being her gun would fit inside.
I also enjoyed her stories of guarding Jackie Kennedy and the kids when they travelled to Aristotle’s island of Skorpios . Of course the Greek gov. was their first line of defense. So Kathryn passed the time (which at some times could be long and boring) on a tiny nearby island visiting with a little Greek grandma who didn’t speak a word of English but always insisted on making her a cup of (strong ) coffee. She found out later that grandma never fixed a cup for herself because she only owned one cup.
At the end of her very interesting talk she told about running into Jackie years later in New York. During the short exchange Jackie actually said to her “ Kathryn you lead such and exciting life”.

Kathryn has written several books, her newest one DO IT SCARED will be out soon.

We have a new little park in Fort Worth. It isn't very big but sits on a patch of grass between our famous Cowgirl Museum and our spectacular new Dickie's Arena. 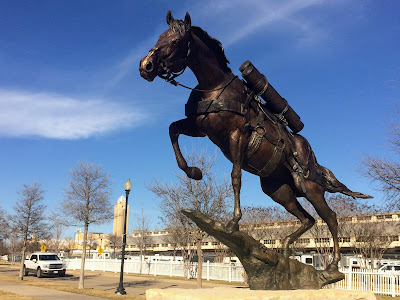 The star attraction in the little park is the eye catching bronze sculpture by artist Jocelyn Russel. Meet  Staff Sergeant Reckless the only horse that has been decorated with two Purple Hearts.

Reckless was purchased in 1952 from a racetrack in Seoul Korea for $250 and became what the Marines described as their great purchase ever. Making mission after mission supplying the front lines in the Korean War she was not only brave but smart and could complete her mission without a guide. Left to roam loose around the camp, she slept in the tents with soldiers and would eat most anything. She is even said to have once eaten $30 worth of poker chips. To read more about Reckless go HERE. 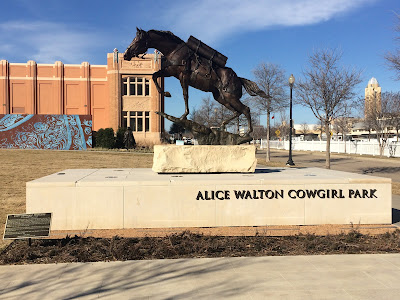 The park was dedicated to Alice Walton the wealthiest woman in the world who now calls Ft. Worth home and has done so much for our city. 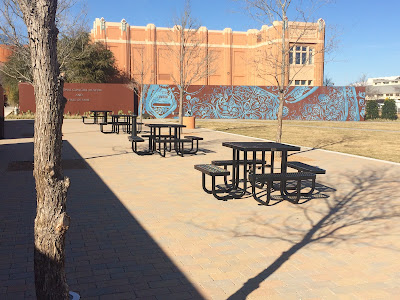 Another nice feature of the little park is a row of tables inviting you to bring a picnic and stay awhile. 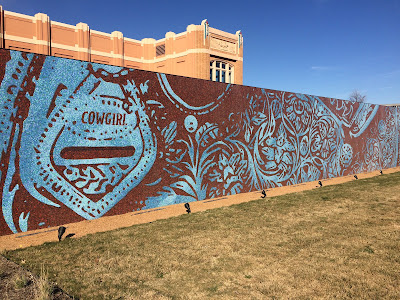 There is a large intricate mosaic mural at one end, the design that of a tooled saddle by the Mellino family of Italy, 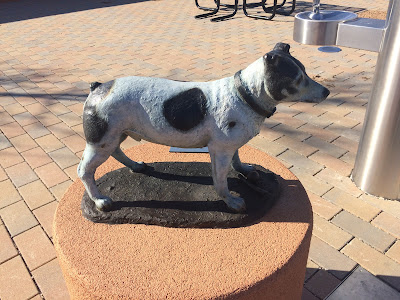 and this sweet little sculpture. 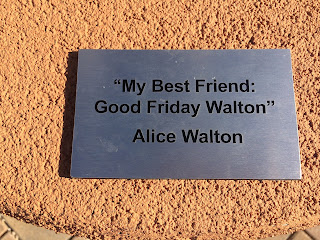 Explained with this plaque.
If you are curious about Alice Walton go HERE

Today I attended a luncheon where the speaker was Bobbie Wygant. You probably don’t know that name unless you are native to the Dallas/ Ft. Worth area. Around here she is a bit of a celebrity. Born Roberta Connolly  in Indiana and educated at Perdue University Bobbie was on the ground floor of television itself . She joined WBAP T.V. Channel Five in this area in 1948, actually even before they went on the air. Holding various jobs she ended up as their celebrity interviewer, with her own show for fifteen years.

She has written a book about her 70 years with the station titled Talking to the Stars.. Her talk today was about the stars she interviewed. Everyone from Olivia Dehavilland, Betty Davis, Bob Hope, Dustin Hoffman ,the Beatles and even current stars like Bradley Cooper. I so enjoyed her talk which was so interesting and at time hilarious. 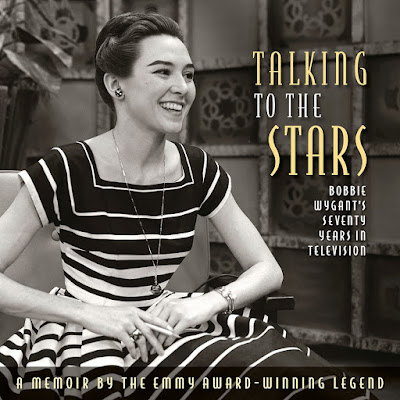 As a young interviewer....from her book 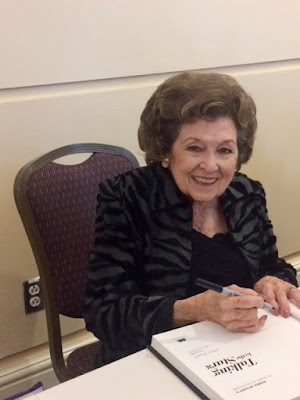 Many of you know that I have been in Austin, TX this past week helping out with my newest granddaughter. Tom had driven me down but had to return home. He had every intention of coming back to pick me up at the end of the week, although I decided I wanted to try a new bus service. 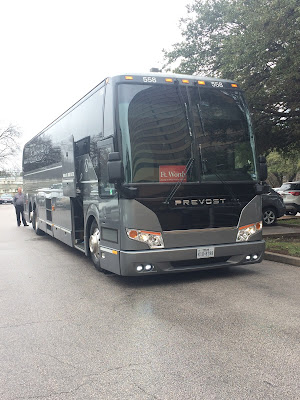 That bus service is a luxury bus service connecting our states largest cities. We do have a short haul airline service..but paying for a last minute ticket, having to arrive at the airport and hour before flight time, standing in long security lines was not very appealing to me, and besides like I said, I was curious about this bus service.. 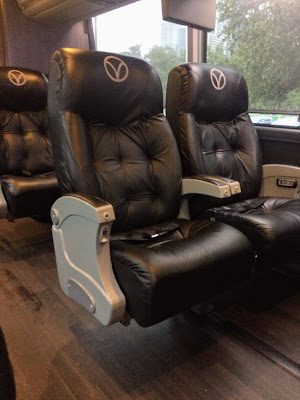 Well let me tell you, it was amazing!. There was an attendant onboard offering pillows, and blankets. She also served free food, coffee, soft drinks, endless snacks and liquor was available for purchase.With free WIFI and a selection of movies not to mention the comfy seats....I felt like I was in a first class section of a plane.I will surely become a frequent customer!
Posted by Janey and Co. at 6:24 AM 14 comments:

It’s All About The Beat

I’ve been out of town enjoying my new grandchild, and realizing that there are so many activities for children now that were not available when I was raising my little ones. Yesterday we went to music class. 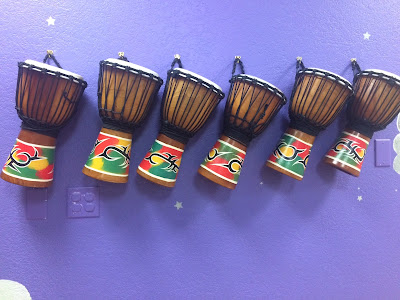 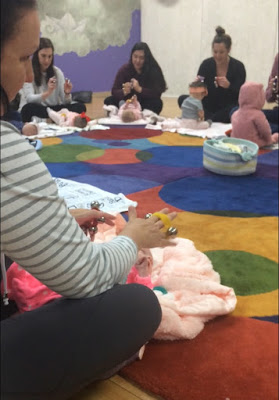 Here the parents were joining in with bells. They say exposing your little one to a variety of musical sounds helps support all areas of development. 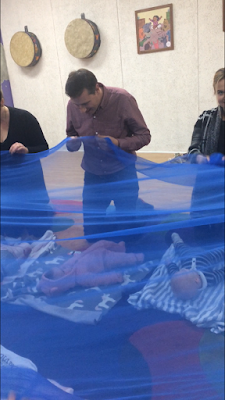 My favorite is when the parents kept time with the soft sounds by waving this net. 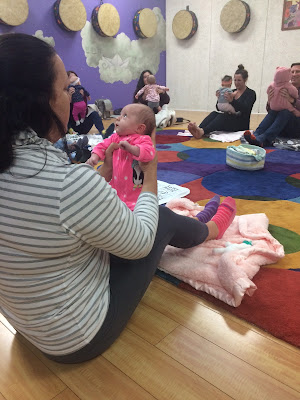 Even the youngest seemed to be spellbound by the tunes..
Who knows maybe we will have a budding musician in the future!
Posted by Janey and Co. at 7:06 AM 8 comments: