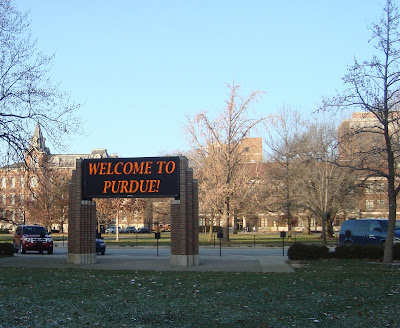 We are still on our trip around the country (U.S). We stopped for the night in Lafayette, Indiana

Sitting on the banks of the Wabash River (in Lafayette) is Purdue University. It has a beautiful campus with around 30,000 under graduates.

It was snowing when we arrived, but it turned out just to be a dusting.

This exhibit, in The Mint Museum, had it's own room. I thought it was a large toy for children to climb on. Not so. 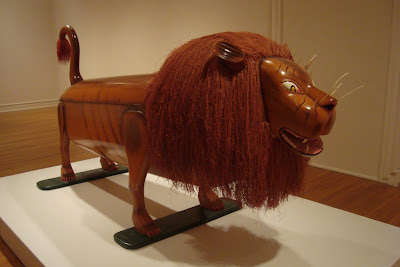 It is actually a coffin desined by Paa Joe of Ghana. These personalized coffins became very popular in Africa in the 1970's. See other  Paa Joe coffins here. 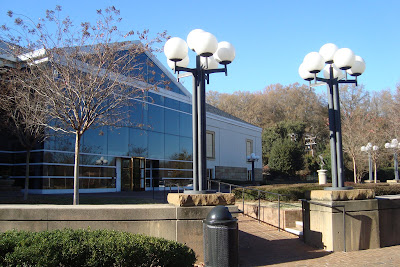 Before we headed north from Charlotte, NC. Tom and I took one more long walk. We found ourselves at the Mint Museum (Randolph) and decided to go in. 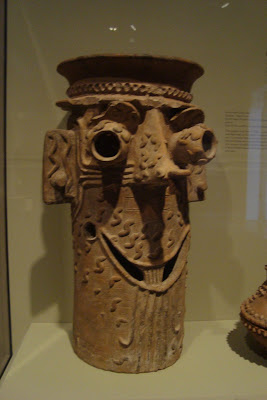 It was a most interesting place. Lots of ancient art from the Mayan Civilizations. 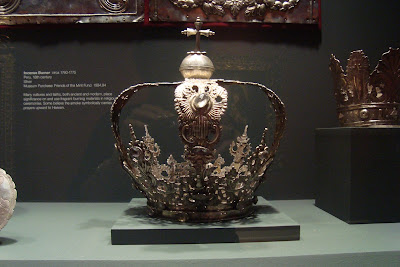 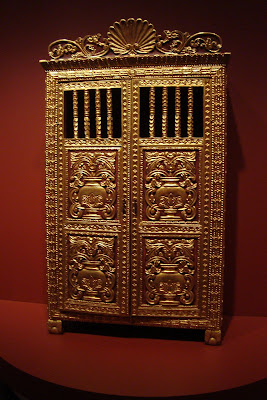 \
and a gold plated chest .

Fashions from centuries past, 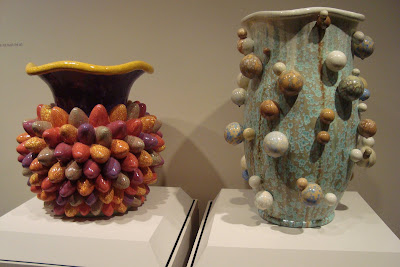 but mostly lots and lots of pottery, some of it very unusual.

We forgot to take our cell phones, and were so interested in all of the exhibits that time got away from us. My poor daughter was driving around trying to find us. She was convinced we had gotten lost. I think the parent child relationship has reversed...

They had a great barn on the Latta Plantation. 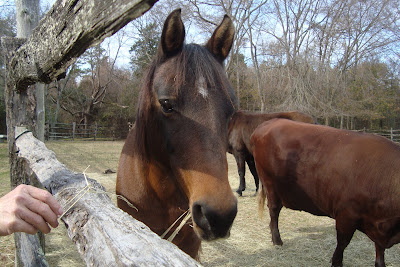 and a horse that that liked being fed 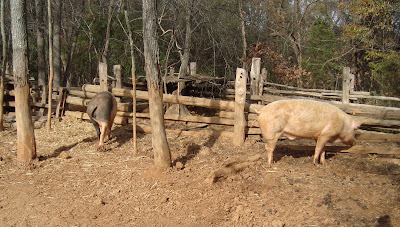 a couple of pigs 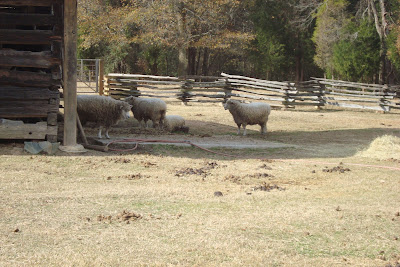 a pen of sheep 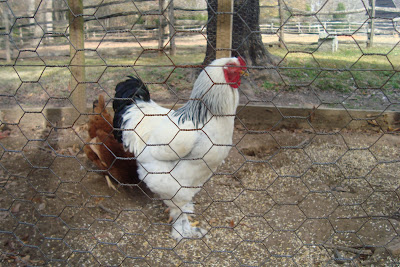 and a very  regal looking rooster.

The weather was perfect the afternoon that we went to the plantation, but a cold front has now blown in.

We actually left Charlotte , NC early this morning. We drove north to the state of Virginia, cut across West Virginia to Kentucky where we headed north into Indiana. Yes, we have left the deep south and we have arrived in the mid west. Spending the night tonight in Lafayette, Indiana, home of Purdue University. Maybe I can stop by in the morning , and take a photo to show you. It;s snowing like crazy here!....Janey 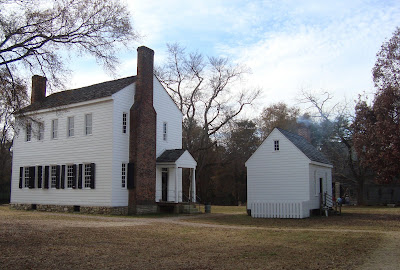 Back then (mid nineteen century) the kitchen was still separate from the house. Look closely and you can see smoke coming from the little kitchen house on the right. 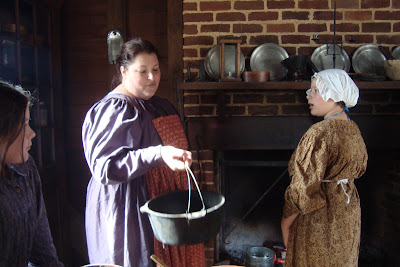 These ladies, in period dress, were cooking recipes from that time period. 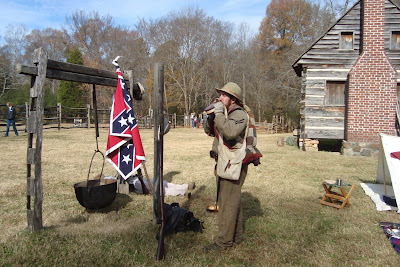 A soldier in a Confederate uniform was answering questions about the Civil War. 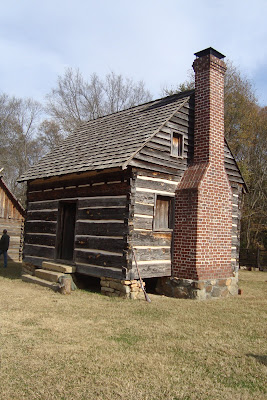 Small  out buildings was where farmhands, such as the overseer lived. The cabins for the slaves were sparsely furnished and had only dirt floors.Tomorrow we will meet some of the farm animals.


The weather is unusually mild in North Carolina for this time of the year. So, instead of shopping  the day after Thanksgiving, like so many do. Tom and I decided to pay a visit to the only plantation that you can tour in this area. Part of a large county park is Latta House Plantation. 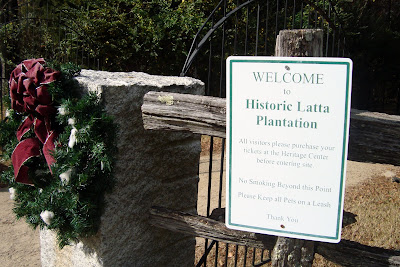 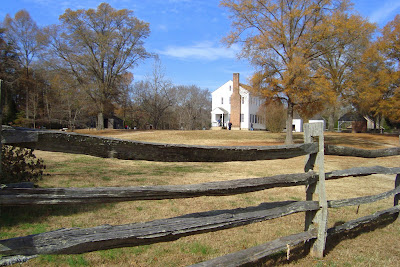 At that time, most of the population, in this part of the country, lived in small log cabins, so this large house was something to behold. Like *some southern plantation owners James Latta was able to work such a large farm, because he was a slave owner, a fact that we are not proud of this day and time. Records show that James Latta owned thirty three slaves . 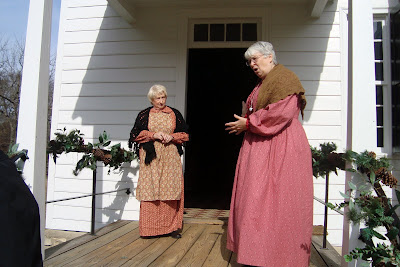 Dressed in period costumes, these ladies were there to welcome us and answer questions. We were not allowed to take pictures inside of the home, but come back tomorrow for more pictures of this large estate.

*I was surprised to learn that not all plantation owners held slaves. While any at all was, in my opinion, not acceptable ...the average was about 25% 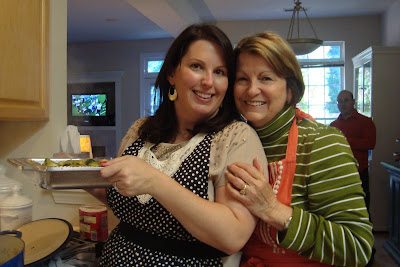 Thursday of this week was the American holiday, Thanksgiving. We left daughter #2 ( Kerry & family) in Atlanta and headed north for the four hour drive to Charlotte, North Carolina where daughter # 4 (Stacy & family) lives.  We arrived just in time to put on aprons and help cook!

Stacy, like several of our daughters, loves to cook. She prepared all of the traditional Thanksgiving foods including a delicious pumpkin chiffon pie. Yum!
I hope that those of you that celebrate Thanksgiving were able to be with family or friends on that day, or both! Janey 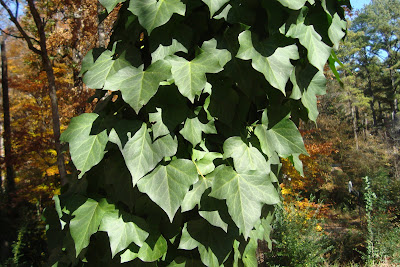 
Some of you may remember that we were to deliver a portable sewing machine to our friend's daughter in Atlanta. With some creative packing , I am happy to report, that we got everything in the car. 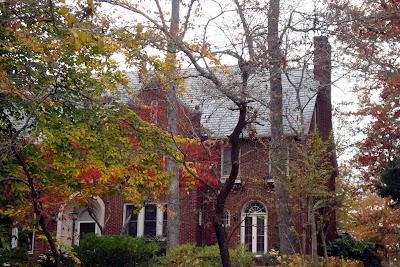 The house where we delivered the sewing machine, just happened to be on the very same street where the 1989 movie Driving Miss Daisy was filmed. Above is Miss Daisey's house.

If you celebrate Thanksgiving, I hope that you have a wonderful day!....Janey 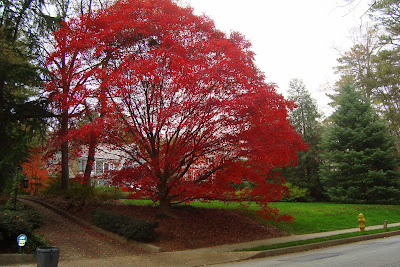 I love coming to Atlanta this time of year. The trees are so colorful. 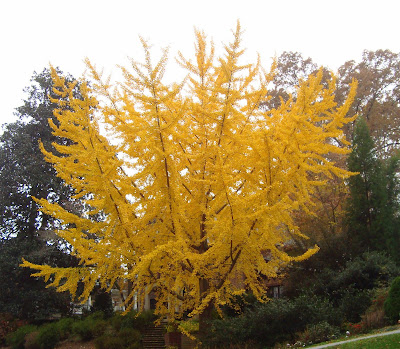 These pictures were all taken in our daughter's neighborhood 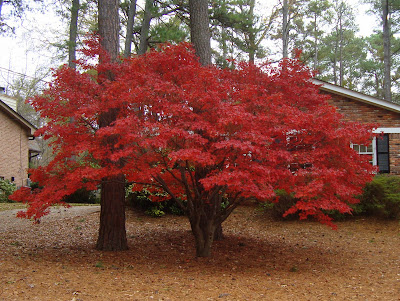 I sure wish we had a Fall like this in Houston 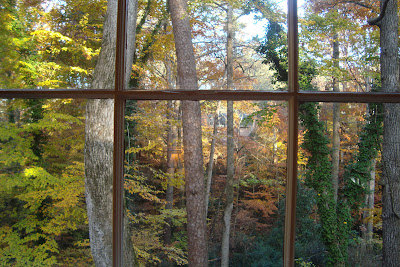 They live on the edge of a ravine and this is the view from the family room.Today we are heading north to Charlotte, North Carolina. 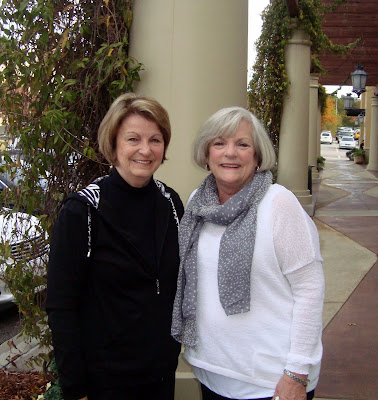 On the road to Atlanta, Ga, we drove through Birmingham, Alabama. I don't think I have to introduce the lady with me in this photo to many of my blogger friends. Yes, it's Virginia from Paris Through My Lens V was nice enough to meet Tom and me for coffee at the crack of dawn, and what a treat it was to meet her! I am not sure that I worked into the conversation that it was because of her blog... that I was inspired to start blogging myself ....and she was one of my first two followers! Fun times! 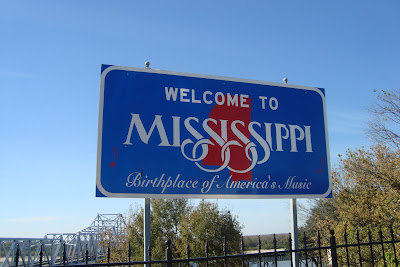 We drove across the state of Louisiana today too, but I didn't take a picture one. I do  get excited however every time we arrive at the mighty Mississippi River. There are two routes to choose when driving from Houston to Atlanta.(Georgia) Tom and I prefer the northern route, which takes us across the Mississippi River at Vicksburg, MS. (Interstate 20).
s 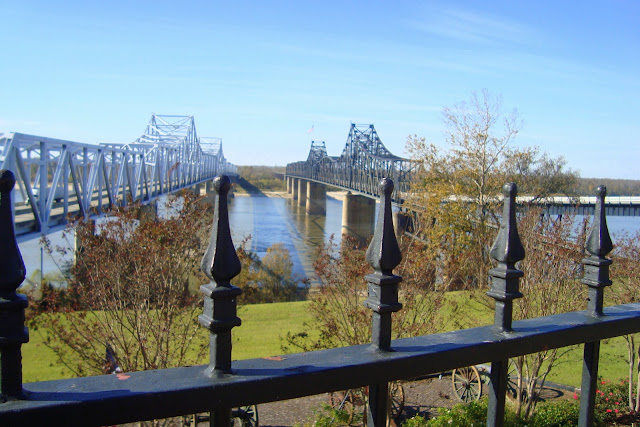 We  stopped at the welcome center, which sits on a high bluff above the river. The bridge on the left is for cars and the one on the right, trains. Gosh, it was a beautiful day. 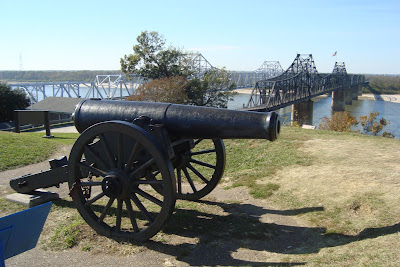 It was here in 1863 that the Siege of Vicksburg was fought in the the Civil war. Many people will tell that the turning point in that war was the battle at Gettysburg, but others will argue that it was fought right here in Vicksburg. After many attempts, with Major General Ulysses S. Grant calling the shots,   the Union Army, finally took this stronghold, which was a major supply point for the Confederate army because of it's location on this mighty river.
We are getting back on the road early this morning. Come back tomorrow for a big surprise! 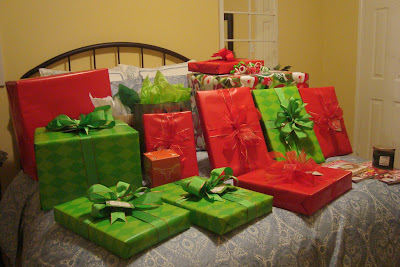 I know, I know, it's Thanksgiving, not Christmas, but Tom and I are headed out, early this morning, for a very long car trip, where we will visit three of our five daughters and their families. First stop, daughter # 2 in Atlanta, Georgia,  then daughter #4 in Charlotte, North Carolina, and finally daughter #5 in Chicago, IL.

We are taking this opportunity to deliver their Christmas presents, so that we don't have to mail them when we return. I say we, but Tom has not looked in the guest room and seen how the stash has grown.. A friend asked him this week, if we had room in our car, to deliver a sewing machine to her daughter in Atlanta. I heard Tom saying "sure, we have plenty of room". Hmmmm. Stay tuned.....:)