Their Days Are Numbered

Good Morning. Tom and I received our second dose of the Moderna vaccine on Monday. Today is Wednesday and I am happy to report that we have had no problems with reactions, except maybe a sore arm. My younger sister had a day of feeling sick with her first dose and same thing happened this time. Chills, fever, aches and a general feeling of tiredness, but she reports she is beginning to feel better this morning. It is all worth it folks....so don’t let news of people feeling sick afterwards keep you from getting these life saving vaccines!

Now back to the subject at hand... 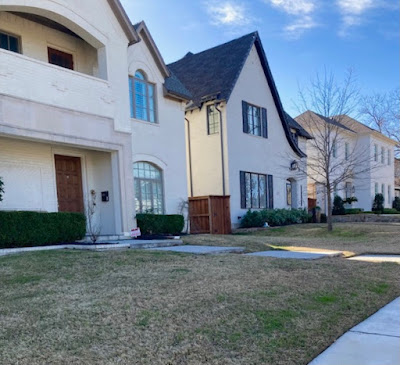 When an area has been deemed a hot real estate market new
homes appear overnight especially if the area  is a close in neighborhood . 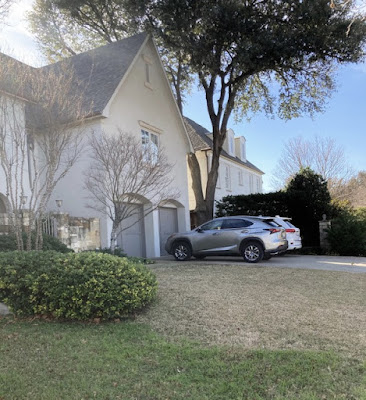 Both ends  of a nearby block look just alike to me. Seems homes with white painted bricks are all the rage! I can’t figure out why all of these homes which were all custom built homes are the same color. 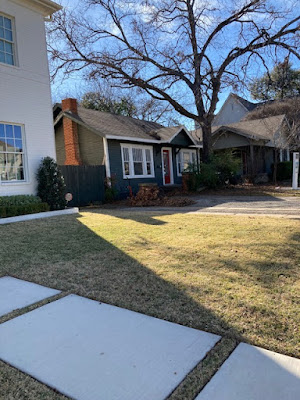 Oh dear, what is this? Seems right in the middle 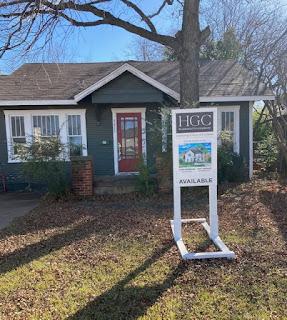 of the block are two smaller frame houses, probably built in the 1930’s 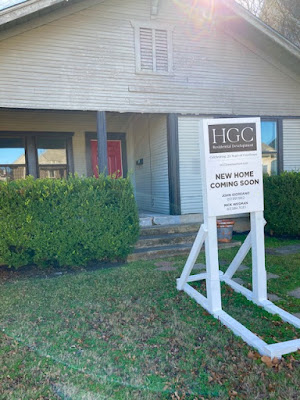 and I think their days are numbered. 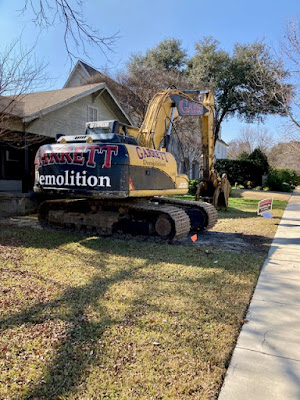 Yep, this guy arrived this morning. Hmm I wonder what color the new homes will be?
Posted by Janey and Co. at 1:34 PM 10 comments: 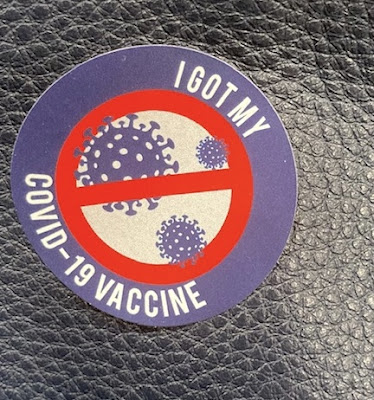 We are so happy to report that we received our second dose of Moderna vaccine today. 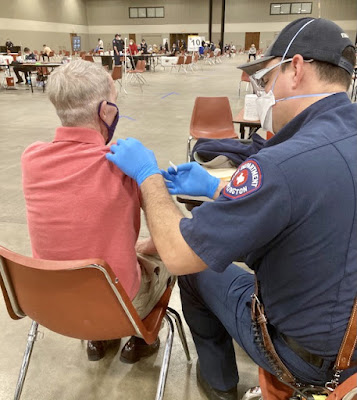 We of course will still need to stay in for the next ten to fourteen days, but there is finally an end in sight! I will let you know if we have any reactions. From the first shot I had a bit of a rash and itching at the injection site...but hubby had none. Some folks report that there is a slight chance of feeling lousy for a day or two after this second shot. So, we stocked up on groceries ahead of time and I  am going  to cook a casserole (good ole comfort food) that we can enjoy for several meals. I hope that all of you have an appointment for a vaccine soon.
Oh by the way my arm did not turn blue...that sticker is on my purse!
Posted by Janey and Co. at 4:04 PM 7 comments:

The Surprise At The End!

I really can’t keep saying I am new in Fort Worth, Texas since it has now been over seven years since we arrived. We built a new home just west of Ft. Worth’s culture district, an area with many wonderful museums. None quite as fabulous as The Kimbell.

The Kimbell, finished  in 1972, looks a bit like a train station from above, when in reality it is the clever design of  world renowned architect Louis Khan, and those concert vaults are considered Khan’s most outstanding architectural achievement. 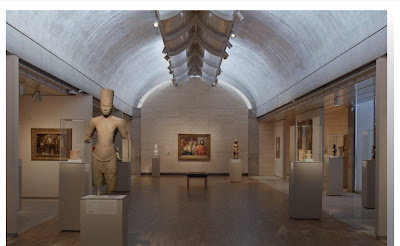 Magically those vaults illuminate the interior when the sun shines without damaging the works of art. The museum came about because of the dream of this couple. The Kimbells  were very successful business owners in Ft. Worth. Their wealth attributed to many businesses, grain mills, wholesale and retail groceries to name a few. They also collected art. Their very large home in west Ft.Worth became a museum in its own right. After Mr. Kimbell passed away his foundation decided to build a proper museum. Taking the reigns of that project was his niece Kay Carter Fortson since the Kimbells had no children. 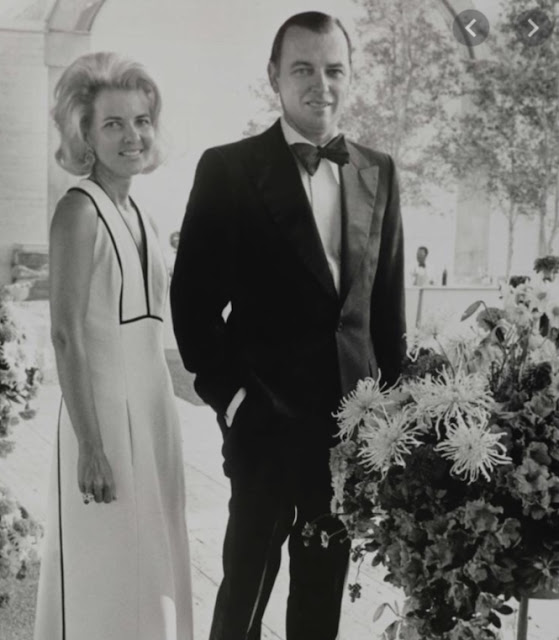 She was quite the  young socialite and  surprised everyone, including herself, as she charged ahead without  any experience and tackled this huge undertaking which today is history.

So why is this post titled The Surprise At The End? 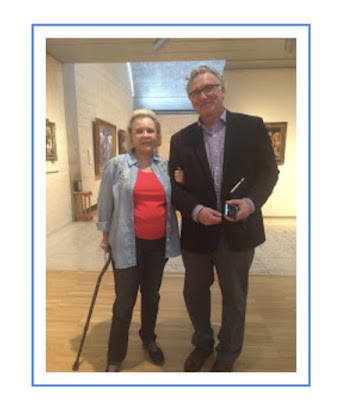 Well, a few years ago on a rainy day we took our visiting guests to The Kimbell. The man and woman above approached us and the man asked  me“ may I ask why you  are at the Kimbell today”? A bit startled, I can’t remember what I said.... 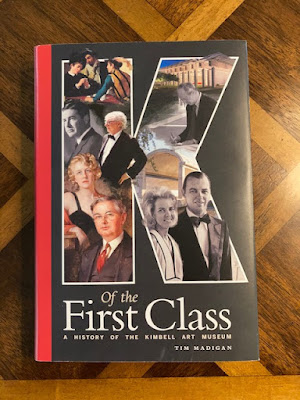 Seems the gentleman was writing the above book, the history of the Kimbell and the  lady on his arm was none other than that niece of Mr. Kimbell who had taken on that  unsurmountable task of  building a museum some forty five years  before.

Half way through the book which I purchased recently in the museum  gift shop, I decided to email and ask the author to give my art group a book review, and I reminded him that we had met.

He thanked me said yes, and told me that there was a surprise at the end of the book. 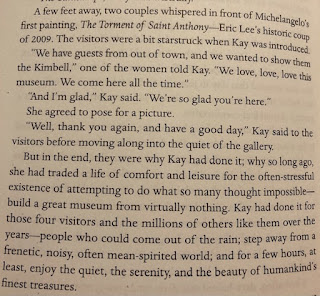 Well...there it is.
The  lady he speaks of at the end of the book is none other than ME!

As many of you know, we split our time between Texas and Colorado. Summers in the Colorado mountains are much cooler than the unbearable summer heat in Texas, so we are usually heading that way in early June, and for the opposite reason headed back to Texas as October approaches. 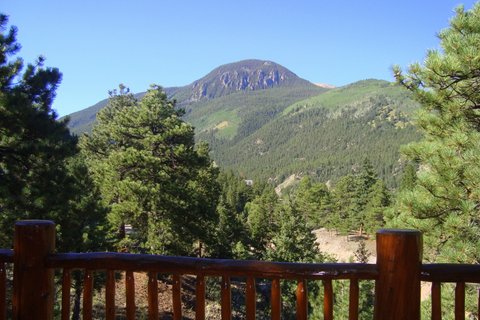 Several times I have posted the view from our cabin. That is Roundtop  Mountain in the distance. 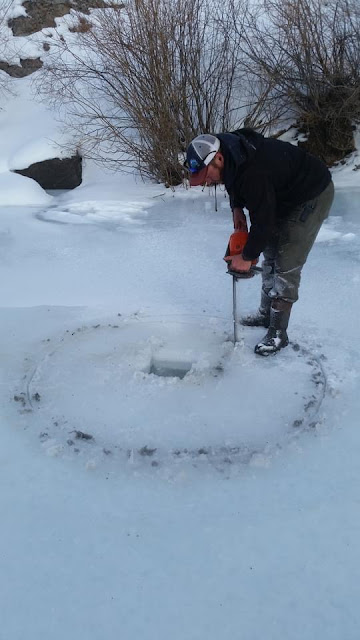 It’s not part of our view, but a short distance down the hill to the west runs the South Fork of the Gunnison River. Ice fishing is a popular sport in the frozen north in the winter. Although it is usually done on the lake which is three miles south of town. So why is this man cutting what looks like a fishing hole in the  river ? 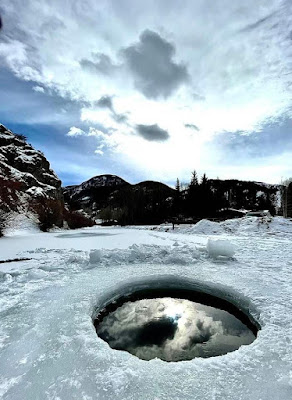 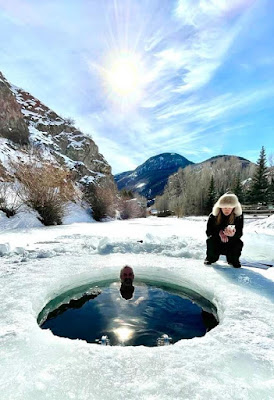 but  look  closely..that is not a fish in the hole!

. There is a (small) group of people that swear by the health benefits of taking an ice plunge. Not sure how long they stay in but it must  be a very short time, hence the person timing nearby.

I have  read arguments about the safety of this practice especially if you have a heart condition, but apparently this group feels it is healthy for you and they enjoy the “rush” that they feel.

Have you ever taken an ice plunge, or would you? 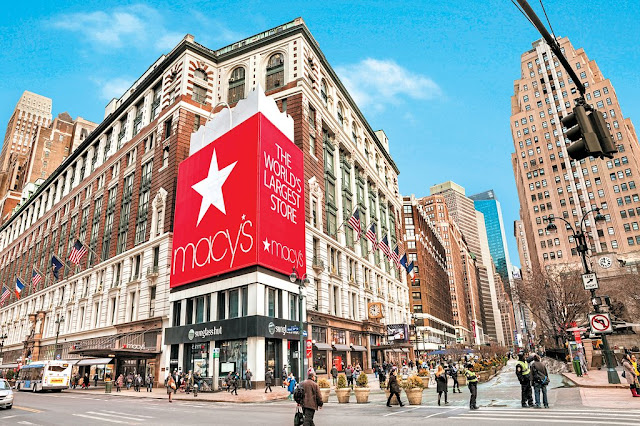 I don’t have to tell you that department stores around the world are suffering. I have to admit that I find myself shopping online more and more. 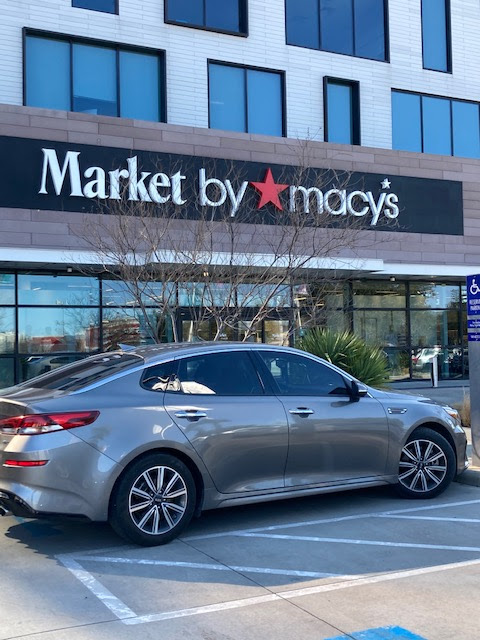 I did discover that there is a new kid in the neighborhood. It is a new concept that Macy’s is trying. A smaller version full service department store. Today was the grand opening right here in Fort Worth, Texas. I didn’t actually go inside, since I am still not doing crowds...but I do  plan to soon since I am getting my second vaccine shot next week.We want to have department stores so I promise I am going to do my part to make sure they make it.

Snow may not be unusual where you live, but it is in Texas! Well maybe not in north Texas, but central and points south have not seen snow in seventeen years! 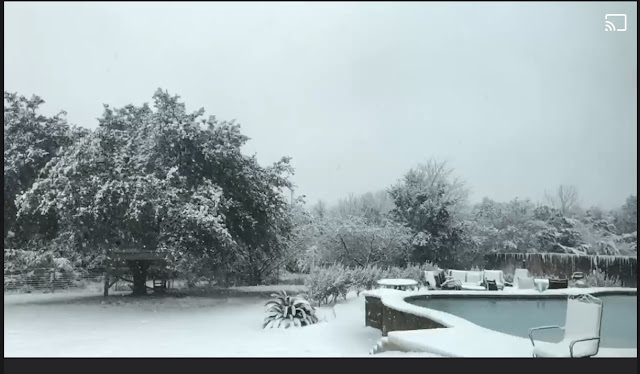 about an hour north of Austin 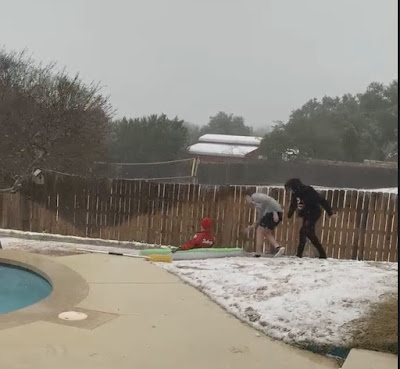 Same  backyard with our grandson and friends trying to bobsled in  kayak. 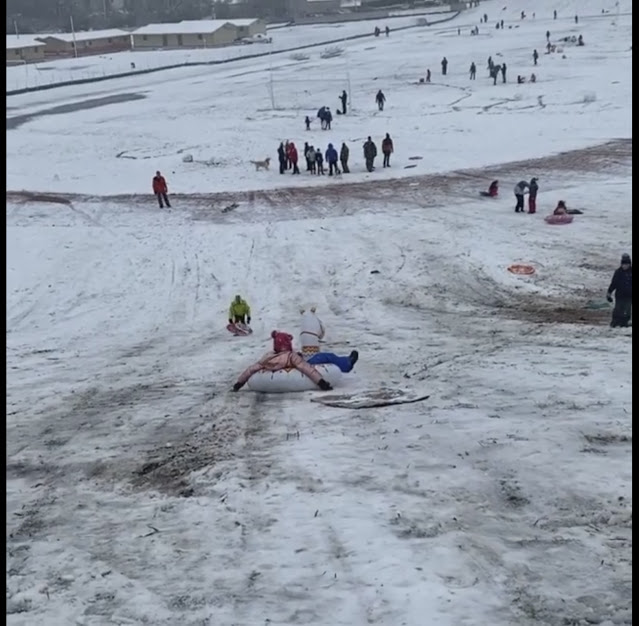 Our granddaughter in Austin sledging on top of a pool float. 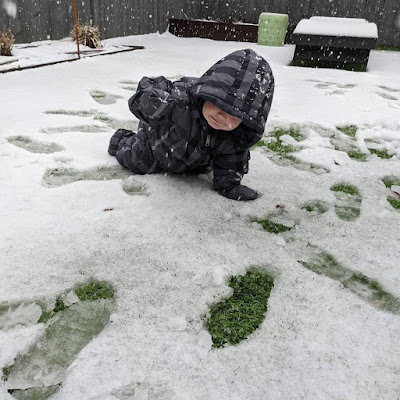 and last but not least ...my youngest granddaughter Maggie who was

confused  by it all!

We have a saying here  in the U.S.“ Don’t air your dirty laundry”. Well there is no hiding what happened here yesterday from anyone in the world. I am heartbroken ... and I was actually physically shaking watching what was unfolding in Washington D.C., not from fear but from anger. To go about my business like nothing has happened is like not noticing the elephant in the room. Although I stand by the unspoken rule that some things need not be discussed on this page...one is religion the other politics...enough said.

I had to run an errand yesterday and came home to this happening  across the street.. 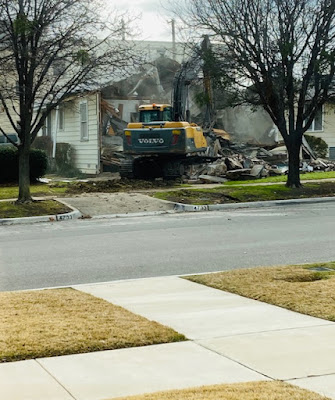 Most of the homes  on our block are new, all built in the last ten years, but directly across the street there are two older small frame houses probably built  in the 1930’s. They belong to a church on the next block, and their youth minister lived in one, their janitor in the other. Old frame homes are not as easy to  maintain as brick homes so when maintinence costs kept raising the church decided to just demolish the one directly across from us. 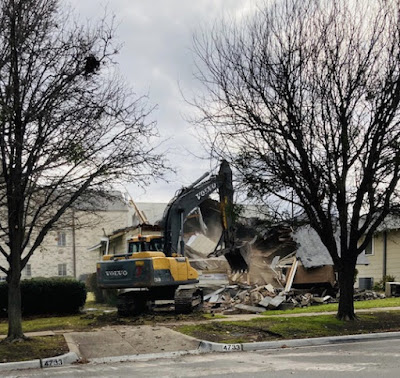 I couldn’t help but  stare at what was going on. It was funny to watch people driving by
several  pausing  for a second look and  others, all men, getting out to stare and take pictures. It reminded me of little  boys who loved to play with the construction toys. We are not sure what will go up in the place of this home...So stayed tuned... 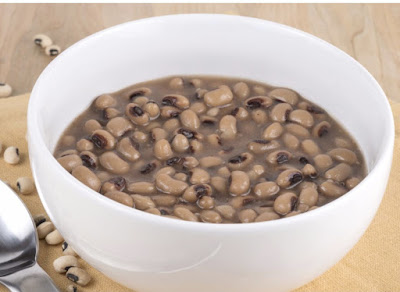 New Year’s Eve as far back as I can remember was all about fireworks...which when I was little were mainly just little firecrackers. Come New Years Day it was all about “don’t forget to eat your black eyed peas”. It was said that you ate these to insure good luck for the coming year.

Some say this southern tradition started back during our civil war in the 19th century. General Sherman and his union army were marching through the south stealing every crop they came across to feed their troops, although they ignored the fields of black eyes peas as this was mainly a crop that was fed to the livestock...or the slaves. So, the confederate army had nothing left to eat and were forced to eat the black eyed peas. I guess someone said eating them would  give them good look. It didn’t work too well for them or for any of us who ate them on New Years Day 2019!

So I didn’t bother on January 1st

Do you have a tradition  practiced at the beginning of the year?