It’s been well over a month since Texas had its news worthy cold weather. Our temperature went down to -2 degrees F.  A lot of people’s homes were damaged by broken water pipes etc..but we were very fortunate to have only lost some of our outdoor foliage.....or so we thought. 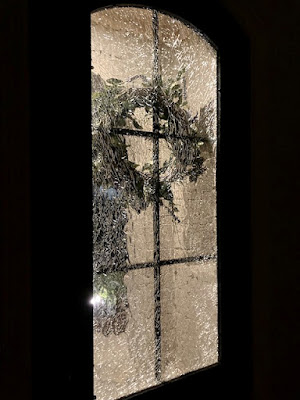 This is the glass in our front door. It is a wavy piece of glass affording a bit of privacy...but it is not supposed to be crinkled like this! 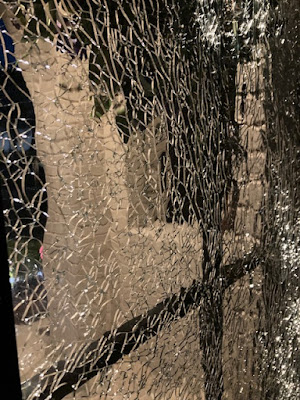 Seems the double  paned glass has an layer of a gas between the layers. Apparently the cold weather caused a tiny crack and for some reason waited until now to finish cracking. The cracking is on the inside of the glass, so it still feels smooth on both sides. Tom likes it and suggested leaving it that way. I on the other hand want it repaired, who knows when it will just  just collapse! The glass repairman will be out next ...we hope.

Ford Motor Co. made a luxury sports car called the Thunderbird, usually referred to as a tbird from 1955 thru 1997 when they stopped production due to lagging sales. This is a picture of a Classic 1956 Thunderbird. l thought these cars were beautiful. 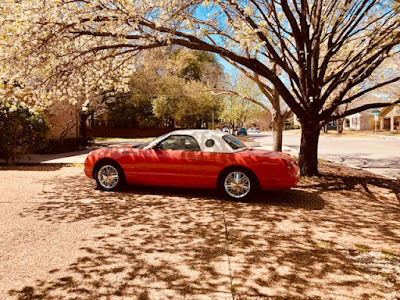 So, on my walk around the neighborhood, I couldn’t help but notice this beauty. I thought at first that it was a vintage tbird.

What I didn’t know is that Ford built the Thunderbird again from 2002 to 2005 and  after looking closer, I think the one in the neighborhood is one of the newer models. I have since found out who it belongs to. Without naming names, this lady was the first wife of a famous musician. Now every time I walk by I start singing Hotel California...
Posted by Janey and Co. at 3:35 PM 7 comments:

In Search of a Shoe

Ever since I have known my husband, he has worn the same style shoe. He does have dress shoes, golf shoes, hiking shoes and sneakers, but you will rarely see him in any of those. 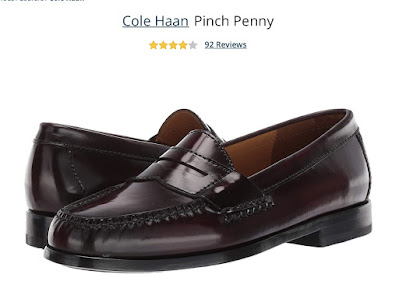 You will more than likely see him in his favorite penny loafers. No he doesn’t put a penny in the slot, although I guess some people do? These shoes have been more and more difficult to find....in stores or online. The problem is they seem to have stopped making this shoe in a narrow width. I can’t tell you how negatively this has affected him! So, this morning we drove over to a Dallas mall hoping one of the two anchor stores would still have his size. I know, we could have called, but it sounded like a way to get out of the house. Besides we planned to get take out at a restaurants there, and eat out in the mall. 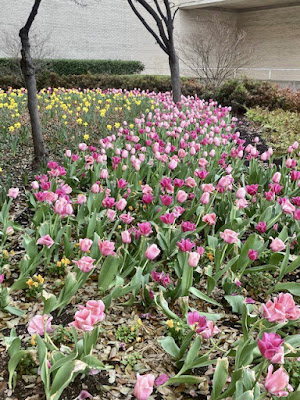 Beautiful flowers were blooming as we walked up to the entrance. Most malls across the US are suffering and many have closed, but this one North Park, opened in 1965 is thriving! It has turned into a luxury mall. Name a luxury store and you will find it there... 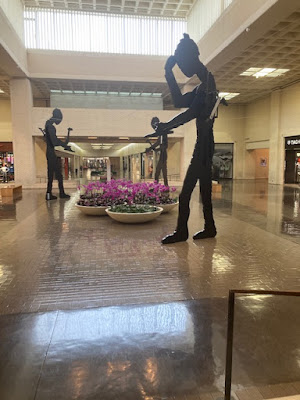 I hadn’t been there in years and it was a treat to see all of the works of art. This is one titled Five  Hammering Men by an American artist Johnathan Borofsky. There actually were five and their hammers where going up and down. 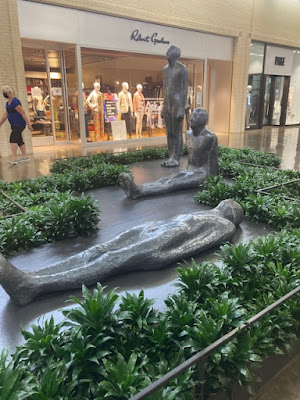 Then there was this by Anthony Gormley from the UK. 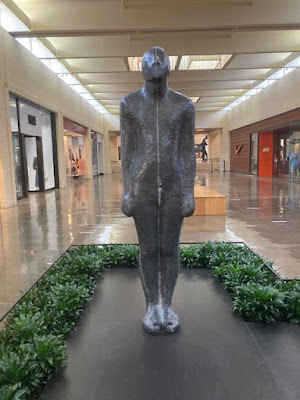 The standing one was titled Anticipation. 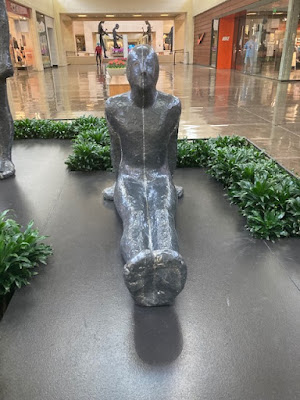 The sitting one titled Contemplation. 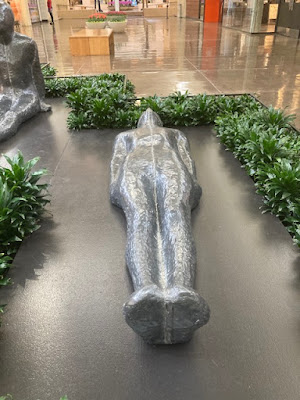 and the reclining one, Dreaming.
No, we didn’t find the shoes, but we had fun window shopping and had a nice lunch.
If you are wondering why there are no people in this successful mall, well it was Sunday morning and they had just opened. If you are ever in Dallas, it’s worth a stop.
Posted by Janey and Co. at 12:41 PM 6 comments:

I have been neglecting my blog lately, sorry! Really don’t have an excuse, just not much going on around here! We have had some beautiful Spring weather  and everyone is holding their breath wondering what plants are dead....or just waiting to sprout out again. For those that may not know we had extremely cold weather for Texas, an unusual snowfall and -2 temps. Gardens all over the state have suffered. 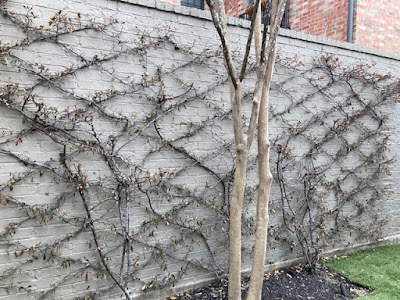 Our Pyracantha that we had trained on the wall of our courtyard is looking iffy! Everyone tells us it will likely sprouting out again. We sure hope so. 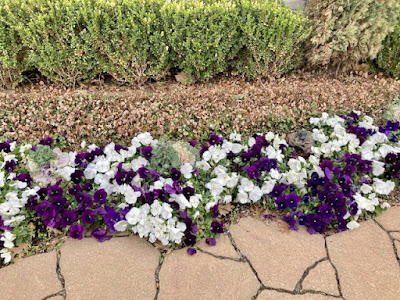 Our pansies did survive. I was out there covering them with old bed sheets when I heard the forecast...Tom  said “those won’t make it” but they did. 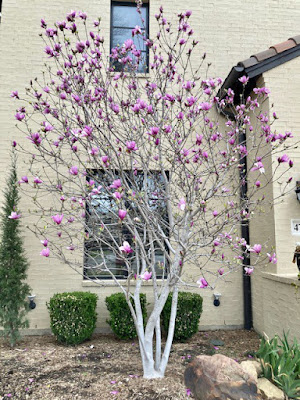 Our neighbors tree...I call it a tulip tree is budding out. I feel sure one of you will know the proper name for it. 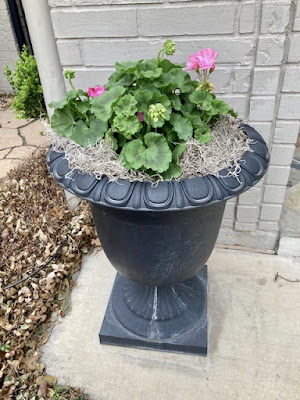 I did plant some pink geraniums by the front door today.. As you can tell I am more than ready for Spring.
We have to make a quick trip to Houston next week and the week after, Tom has hip replacement surgery..

Hopefully I will find something interesting in Houston to tell you about!

Tom and I have been fully vaccinated since late January so  we feel free to go out in the community more and more. We are still being careful and we almost feel like animals that have been in a cage for a long time and someone opened the door but we are afraid to go out.

This morning though our cleaning crew came. They come twice a month and we try and get out of their way. 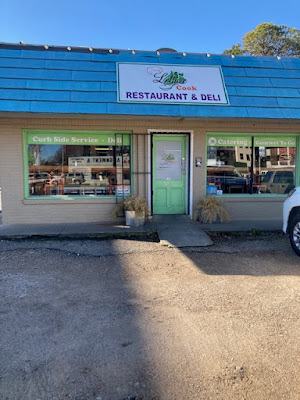 Since we had already had breakfast, we wanted a place to just have a coffee and hang out. Not too far away is  a  funky little deli that is family owned and has wonderful food; gourmet sandwiches etc. Happy to find them open we stopped in and Tom was delighted  to discover they also have delicious chocolate brownies. It is such a comfortable place with wonderful smells and we had never seen it so empty. Although their main business seems to be at lunch. 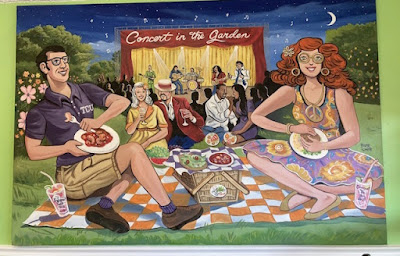 .There  is a colorful mural on the wall depicting the Ft. Worth Symphony’s summer concert series, 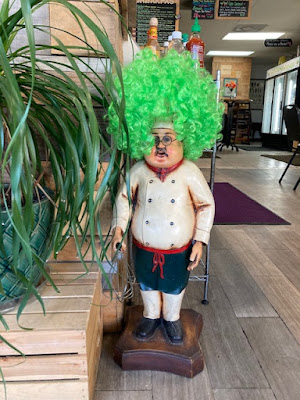 and a whole slew of things that catch your eye. 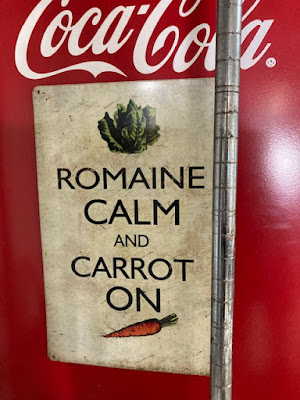 This made me chuckle, 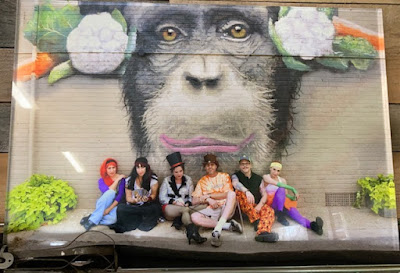 as did the portrait  of their employees. Oh the name of the deli is Lettuce Cook, so if you are ever in town I highly recommend it 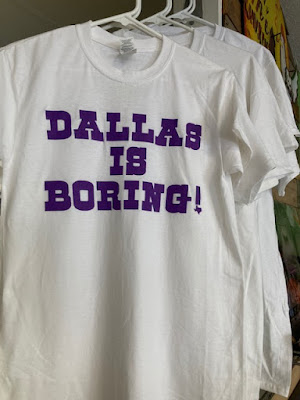 I loved this t-shirt they were selling. You see this area is called DFW which is an abbreviation for Dallas Fort  Worth...but that doesn’t mean that we necessarily like each other!
Posted by Janey and Co. at 12:38 PM 8 comments: