On the previous post, I posted a picture of the fresco's in the  cloister (or hallway) of the Abbey Mont Oliveto in Tuscany. I wish I had done some research before my visit and not after, which seems to often to be the case. If you have time to read all of this...you may find it interesting... 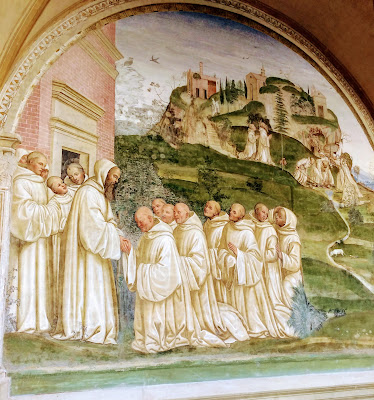 There were numerous fresco's which I did not photograph, since there was an escorted tour in the hallway, and I was trying to stay out of their way. 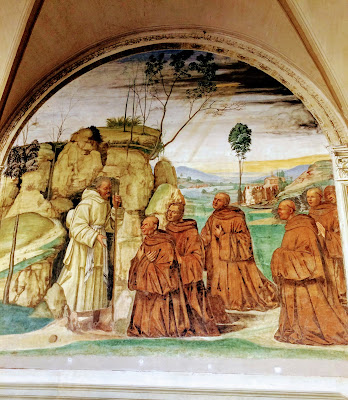 What I did know, at the time, was that the scenes were  following the life of St. Benedict (480-547) a religious reformer, who was  referred to as the Patron Saint of Europe. These fresco's were painted by two artists Luca Signorelli in 1498, 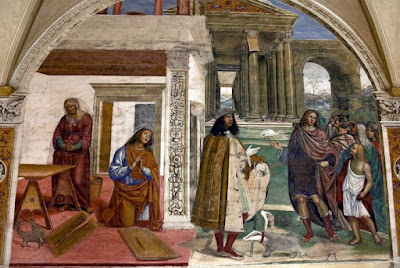 and Giovanni Antonio Bazzi better known as Sodoma beginning in 1505. Sodoma was a bit of an eccentric. In this particular fresco he painted a self portrait of himself into the scene. Turning his back on the subject at hand, so that he could forever make eye contact with the viewer. The clothes he wore were not his own, but those of a nobleman who had left this elaborate getup with the Abbey Prior (superior). Note too, that he added his pets, two badgers, a chicken and a tame raven.

If you would like to read more about Sodoma, who actually was a very talented artist, go HERE


One more post on the Abbey to follow.
Why the MICIO?
COME BACK TO FIND OUT WHAT THAT IS.....