Our downstairs neighbor in the guesthouse (duplex) where we are living, is a concert pianist. It is a real treat every afternoon when he plays (around 5pm). The lovely music drifting up through the floor. Clark was a finalist several times in the Van Cliburn Competition.. So, we were delighted to attend his  recent performance at Steinway Hall, where he preformed Bach's beloved Goldberg Variations. Seen here, playing on one of Van Cliburn's actual touring pianos. We were both amazed that he played for at least and hour with no music in front of him. 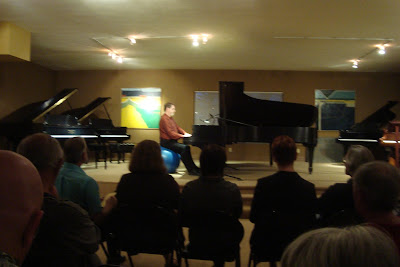 Clark sits on an exercise ball instead of a piano bench. I think I heard it referred to a a musical sphere. ;)

We Need A Home Update
Decided to build..to get what we want in the inner city. Found the perfect custom builder...and an even more perfect lot of land. Told him on Thursday at noon that we would sleep on it. (think it over over-night) . Called on Friday and the lot had been sold by his partner Thursday afternoon (we had not ask him to hold it). Looked at the three other possible lots they have, and didn't like any of them. Grrr....this is getting frustrating....