...to the neighborhood! I mentioned in a previous blog, that I am temporally living in an old neighborhood, where a lot of the homes have been redone. Rose, from Rose from Oz, asked me to picture a few, as she loves restored homes. Well, so do I. Those that have known me longer, know that I conduct the home tours in my little town, where we "summer", in Colorado.
Ask and you shall receive :) Again, welcome to the neighborhood! Built in 1911 just three short miles south of downtown Fort Worth, an idyllic area sprung up, attracting the mighty oil men who had a lot of change in their pockets, and wanted luxury accommodations to match their life styles. 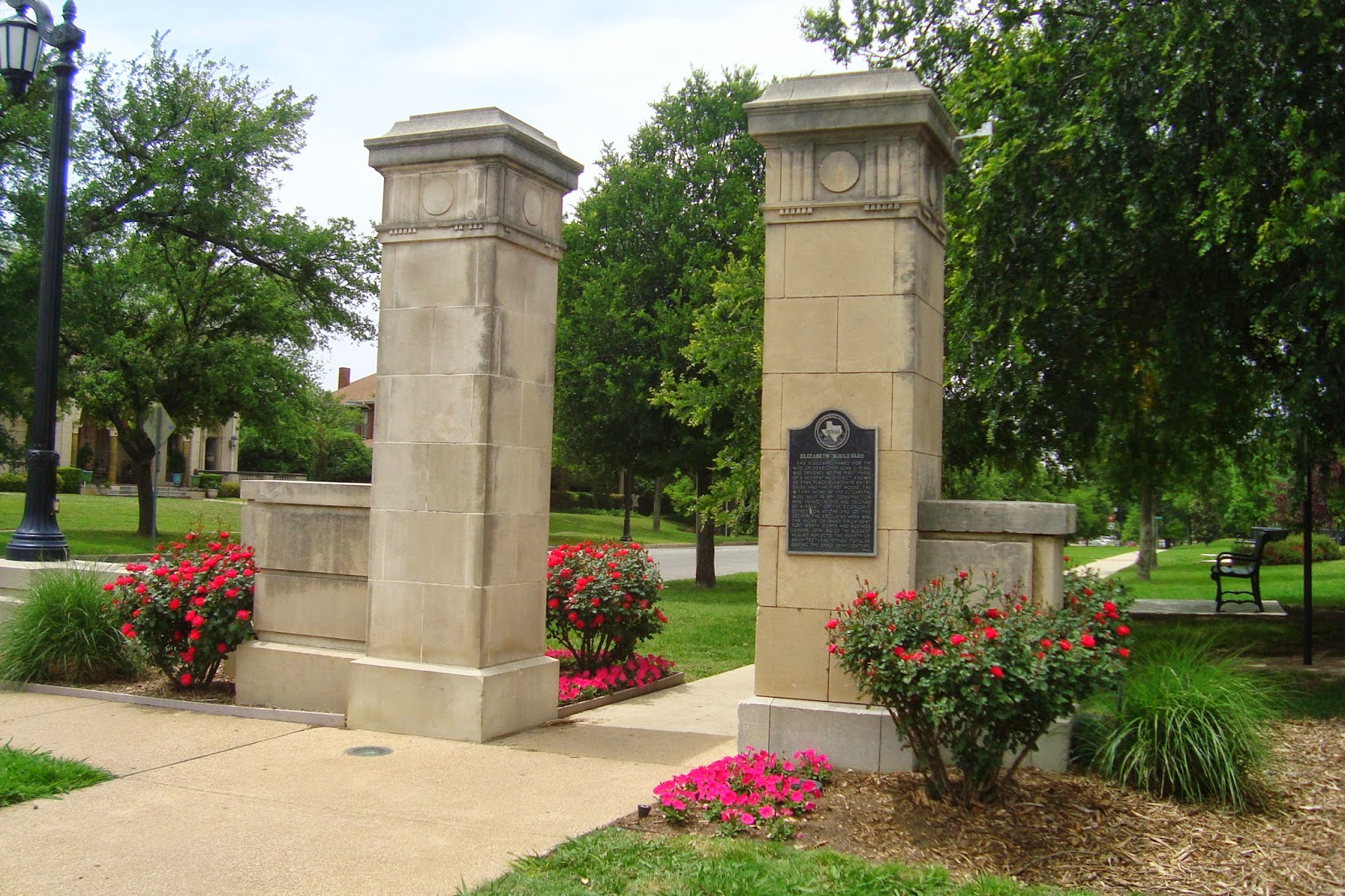 Columned gates welcome you at either end of the seven block long Boulevard, which the developer named for his wife Elizabeth. Beautiful mansions were built along this street, from 1911 through 1929 when the stock market crashed, and the depression ensued; bringing to a halt much of this lavishness.The gates were even torn down in 1955, and for the next twenty years the area fell somewhat into disrepair. Nineteen sixty nine was the beginning of the come back, and come back it has. New gates were built in 1989..and numerous renovations are still going on! 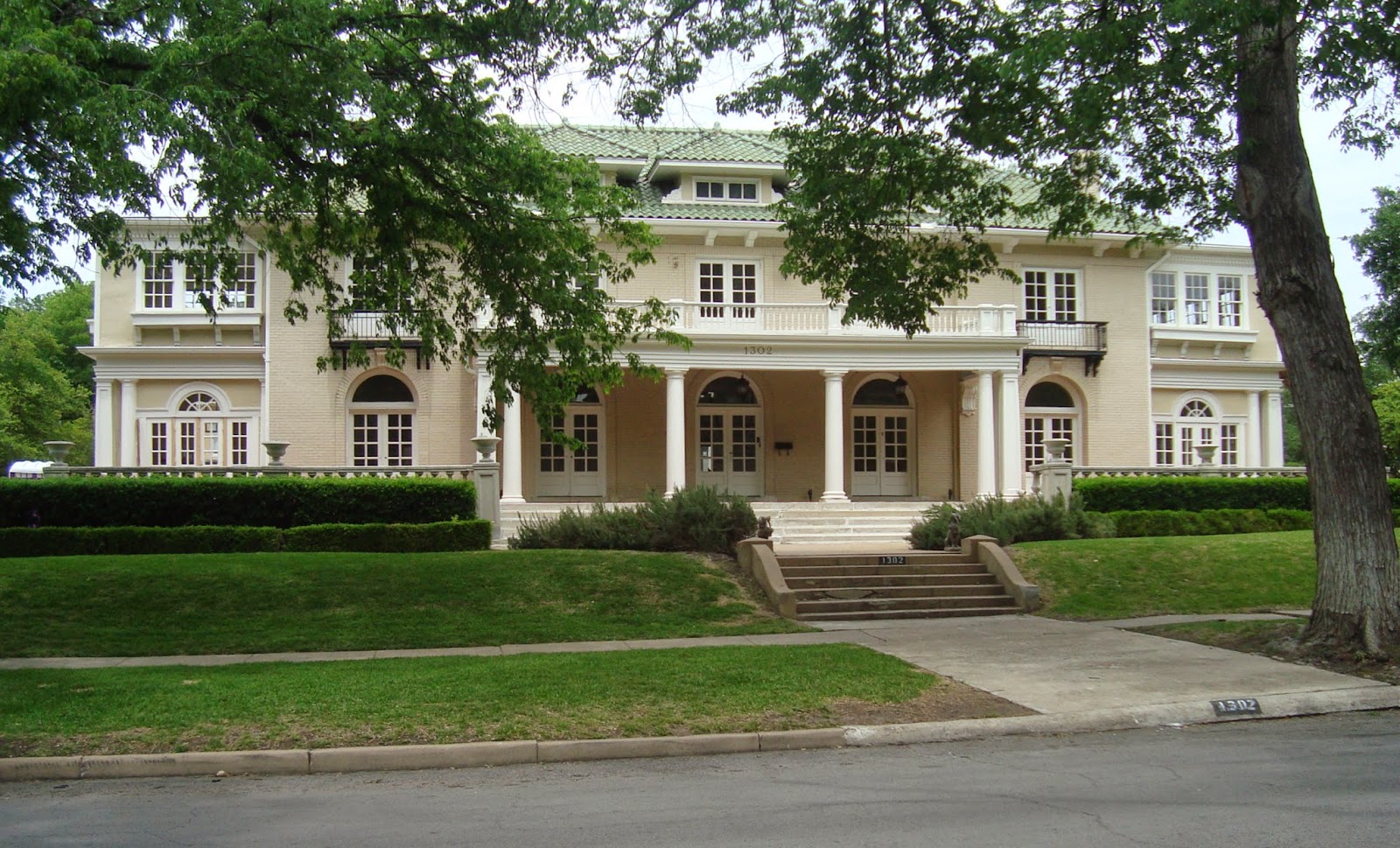 This is the home that the developer (Mr. Ryan) built for himself in 1913. Although four short years later he sold it to a Mr. Smith who owned a Grain Company. It stayed in the Smith family for the next fifty something years. 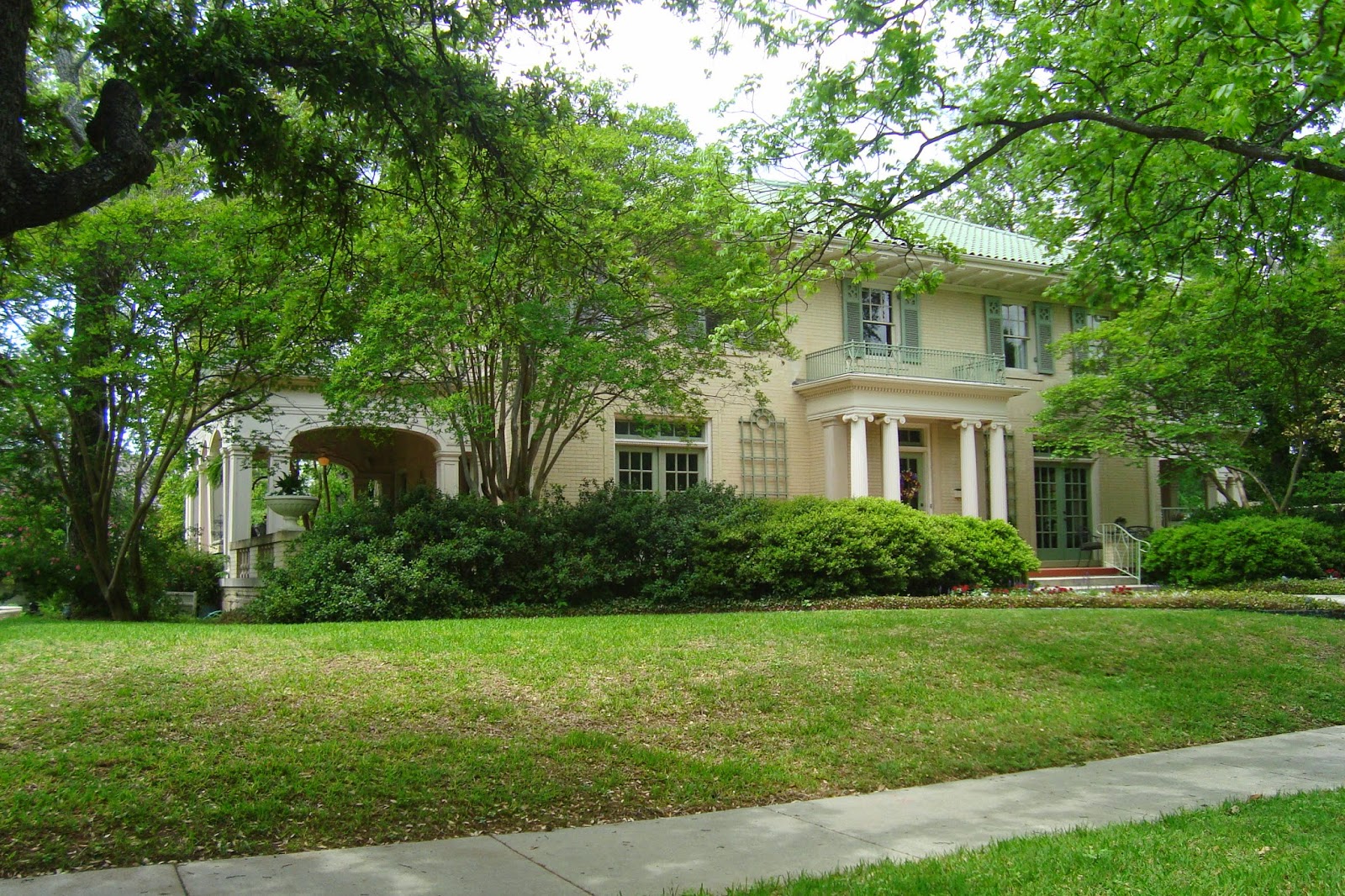 Mr. Ryan did however stay in the neighborhood. He moved to this slightly smaller (yet similar) home that he had built for his son. Mr. and Mrs. Ryan lived in this house  their remaining years. 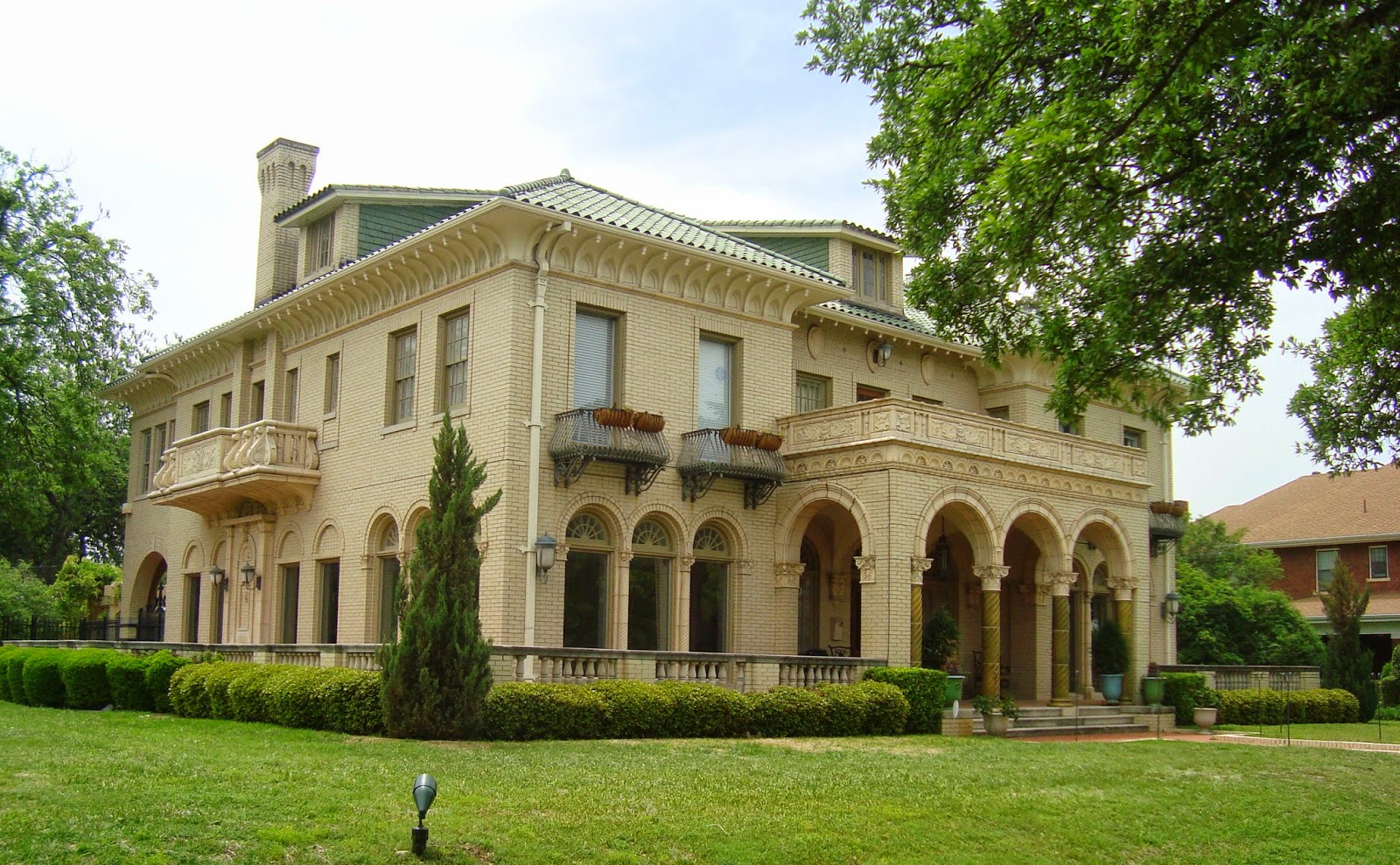 you may click on image to enlarge
There are so many beautiful old homes in this neighborhood, but this is one of my favorites..Sorry, do not  know the history here. 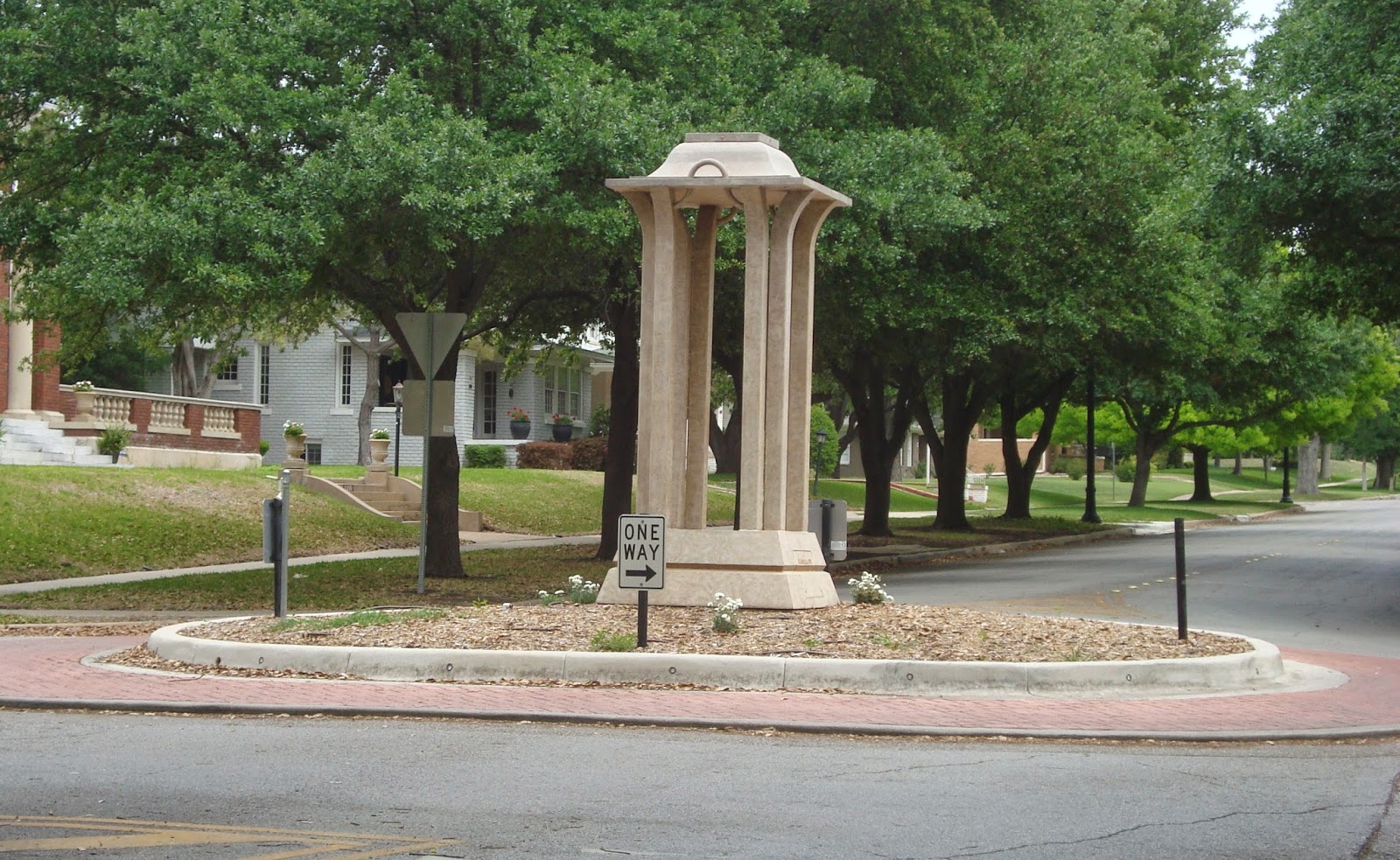 A recent addition to the neighborhood are these round abouts installed at intersections along the seven block Boulevard. These actually were spearhead by my brother in law, Bart. They are having a problem with the plants; something to do with under ground springs (they stay too wet) But, as soon as they figure it our they will be beautifully planted.

* I was just in the Ryan/Smith home this week. It is being restored. Hopefully, I will get to go in again when it is completed. I am hoping it will be one of the homes on the annual Holiday Candlelight Tour in December.

Seems I only pictured white brick homes. There certainly is a selection of other colors and styles. I will just have to take another walk!