My friend in Houston, Sandra, inherited a collection of bricks from her Mother. I have heard of collecting a lot of things, but never bricks! 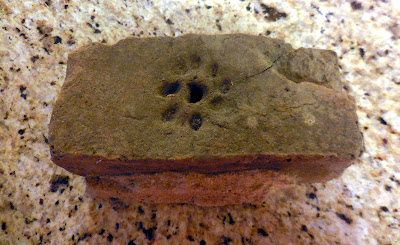 She showed me one of them, since they are packed away and not on display. I am wondering how you would display them? Anyway, this is a brick from Mississippi, made by a slave. The plantation owners made their own bricks back then, or the slaves on that plantation did. It was customary for the brick maker to mark the bricks he made.

I found an article, on the Internet, about a Southern college, with similar marked bricks.