Thought I would let you know that Texas is out of the deep freeze. Actually we had a day this week where it was 80 degrees a far cry from the -2 that led to so much misery around the state.

Millions of people were without electricity which meant they had no heat and to make matters worse their water went off. Some were lucky and had a fireplace...but wood was sold out everywhere and bottled water was just as scarce. Then when the pipes thawed they had broken and homes were flooded.

A niece in Arlington which is between Dallas and Ft. worth lost power as did a niece in another suburb of Dallas. Two of our daughters further south in Texas also lost power and an ice coated tree fell and took out the pump to our daughter’s pool in Austin, but the worst damage was at my nephew Kyle’s in Dallas. They had just completed an expensive remodel of their master bath. Power went off and the newly installed water heater froze up, burst and fell though that bathroom ceiling into his office.

Our Piracantha vine on our wall froze and is turning very brown. 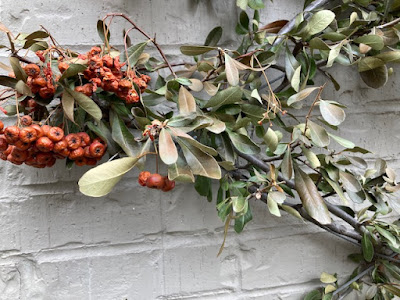 The man who takes care of our yard says to leave it alone. He assures us that new sprouts will shoot out soon and the dead stuff will fall off. I will let you know.

That is about all of the news around here. What has been happening at your house?