I titled this a new vegetable....when it probably isn't, but it is to me. I love vegetables and haven't met one I don't like, although egg plant is not a favorite. 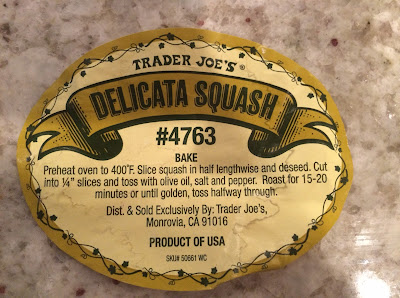 There are a lot of ornamental squashes at the grocery store this time of year, but for this one I found a recipe. Actually it was a blogger that called my attention to it. You may not have a Trader Joe's near you, but surely they are sold elsewhere. 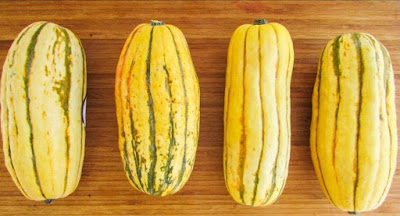 They look like this. Some though are more green than yellow . 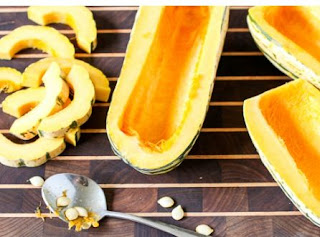 You cut the squash open lengthwise, and scrape out the seeds.
They look a bit like a butternut squash, but the outer skin if much softer, making them easier to cut open.
You then cut the squash into slices as pictured 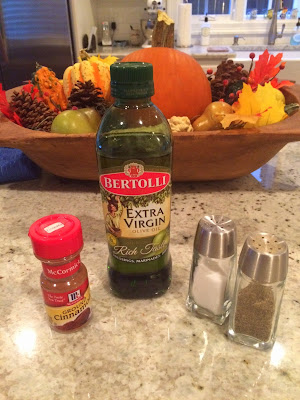 I put the slices in a plastic bag and poured in a tiny bit of Olive Oil....mixing to coat the slices. Then season with salt and pepper. I used cinnamon on a few slices to see what that would taste like. I am thinking next time I would also mix a tiny bit of sugar with the cinnamon. 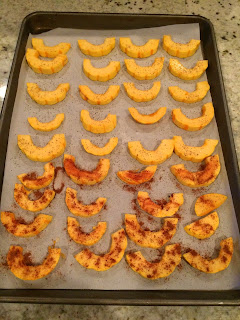 Line the sliced on a roasting pan (jelly roll pan), or a cookie sheet with parchment paper.
Bake at 400 degrees for 25 to 30mins. The instructions on the label said 15 to 20mins, but I like them softer. Again you eat them rind and all....
and eat them we did.....and forgot to take a picture of the finished product! Sorry
Have you ever cooked Delicata Squash?