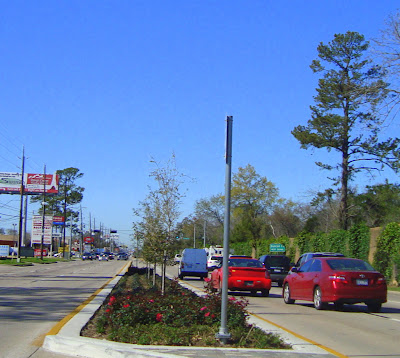 Thirty years ago when I moved to  northwest  Houston, this road , FM1960 ( the  major artery) was only two lanes; one in either direction.  I had to laugh when people from other states would invariably ask:" What does the FM stand for"? Well, believe it or not, it stands for farm to market...This little farm to market road could not handle the explosion of growth in the early '80's and was expanded to six lanes. In the center, dividing these lanes, was an uninterrupted turning lane; making it possible to turn left where ever your heart desired. Well, as you can imagine, there were a lot of head on collisions; which resulted in the state mandating concert medians. That is when a local woman ,with the support of the chamber of Commerce, set out to make sure that the medians wouldn't be just more concrete. She took it upon herself to chair a committee that raised thousands of dollars, through private donations, to plant the area ( over seven miles) which even involved sprinkling systems. Many folks do not realize that the state was going to put in the concrete whether we wanted it or not...so they think that Barbara Schlattman is the villain responsible for these medians blocking their turn. To  Barbara I say thank you for taking on such an enormous project beautifying our community. To the naysayers I ask, what have you done for your community lately?