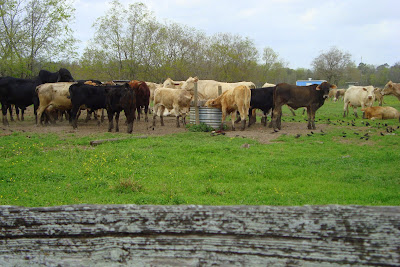 On Monday I explained that the major artery out here , is FM1960, and that the FM stood for Farm to Market. There are folks that would chuckle at that name since it's hard to find a farm  anywhere and  the  only markets are Wal-Mart, Kroger, etc. So, I did want to prove to you that, in less than a mile from my house, there is an actual working farm. After all folks, we are still in the great state of Texas.! Back to the name of that major road. Someone recently had the bright idea of changing it's name. Probably some city slicker who had had to explain the FM one too many times. Oh my gosh ...talk about an uproar; and I thought putting in those medians made folks cranky! More on that later....Gotta go feed the cows!