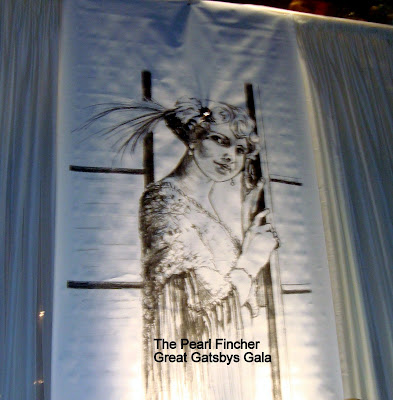 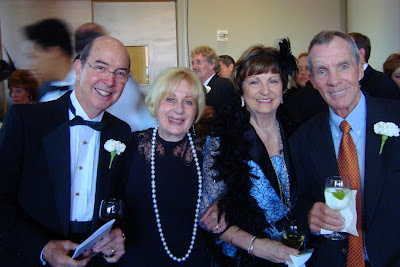 Arriving at the Pearl Gala (The Great Gatsby) we were greeted by this larger than life image of a flapper at the top of the stairs. The men were given fresh flower boutonnieres for their lapels, by the welcoming committee, and the ladies a choice of a boa, or a strand of large pearls. I would say about half of the large crowd were dressed for the occasion.(1920's era)...My attempt being a sparkly blouse with long satin lapels and a feather fascinator on my head.
The invitation stated Black Tie Optional, so normally my husband would wear a tux, but moths had moved into his closet over the summer. Moths with very formal appetites.! I actually accused him of chewing holes in his tux himself...since dressing up is way down on his list of things he likes to do .Tom would rather be dressed in hiking pants, a frayed t-shirt and  boots, making his way up a 14er! Last night he was being The Good Husband and humoring me, but not to the point of wearing a half eaten tux! Come back tomorrow ...I have a few  more pictures from this festive event .