On our way back from Galveston, we stopped over in Houston (where we use to live) to attend the fiftieth anniversary party of some dear friends. They had invited thirty of their closest friends to an elegant dinner at the beautiful Champions Golf Club to celebrate. 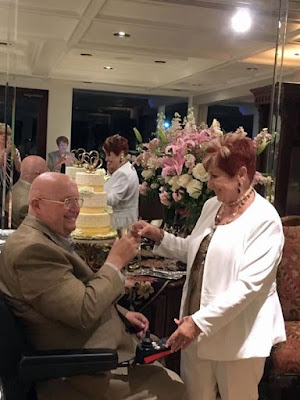 Jim, confined to a wheelchair, has been in poor health for the last ten years. 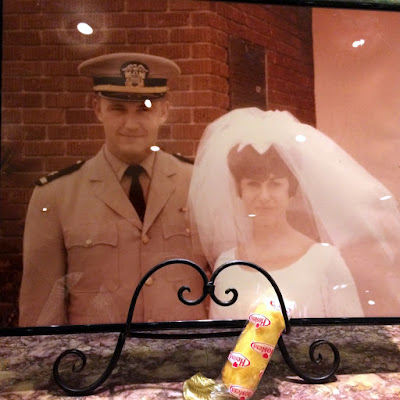 There were many pictures of them, as younger folks, scattered about the room. This one taken right after their wedding. They had a big ceremony planned but Jim received orders (from the Navy) that he was shipping out to Vietnam sooner than expected, so they were just got married by a local judge. Maybe you are wondering about the Hostess Twinki in the picture?

Well, we all had a small gift bag in our chairs.
Jim, who is a gifted story teller, explained. They went to a hotel at Disneyland for their honeymoon. Sherry commented when they got to the room that it was a shame that they had a wedding without a wedding cake. Jim went down the the hotel gift shop and and returned with the only thing he could find that resembled cake. He then invited us all to open our bags, and enjoy a piece of their wedding cake.
Happy Anniversary Sherry and Jim!