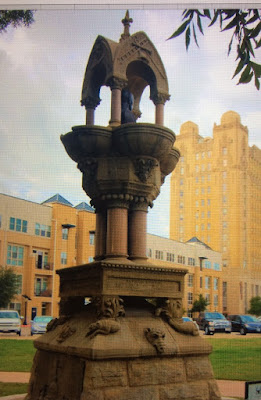 In downtown Ft. Worth, Texas near what was the Texas Pacific Railroad Terminal (now condos) stands a very old monument to a special Englishman. 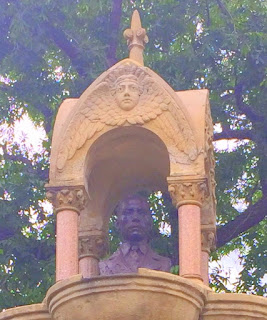 There is a bust of him at the top and a history plaque explaining what he did, way back before that terminal building was even there. 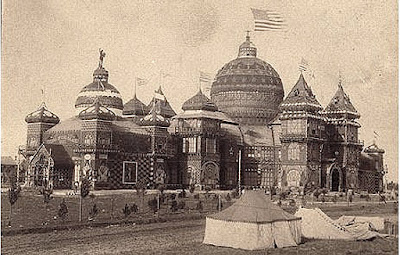 The Texas Spring Palace
You see, on that spot  in 1889 there was a fabulous new exhibit hall  built to showcase the crops and produce grown in the state of Texas in grand style. The area was more like a fairground. The building having a large ballroom as well as displays of various priceless artifacts from Texas history, like the flag that was carried at the battle of San Jacinto and Sam Houston's walking cane.You could even fish in a small stocked pond or watch a prairie dog village with real prairie dogs scurrying about.Crowds came from all over the state during the first exhibit, and the one the following year. That exhibit was to end on May 30th 1890 climaxing with a huge society ball. There were a reported 7,000 people in the building 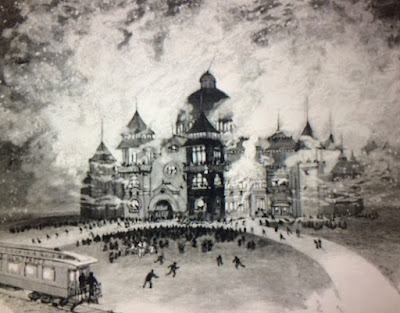 when a child stepped on the head of a match causing the entire building to become a ragging inferno. People fled the first floor and those on the second were dropped into the arms of the crowds below. 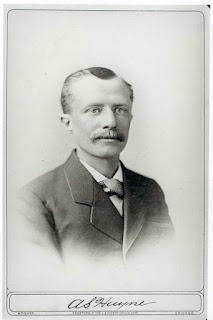 Miraculously there was only one fatality. A forty one year old English Engineer. Al Hayne who was born in London to an upper class English family, educated at Eaton College and was living and working in Ft. Worth at the time. A single man he decided to attend the ball that was widely advertised as the grand finale of the exhibit. Mr. Hayne bravely saved countless numbers of women and children by dropping them to the crowd below. Sadly by the time he jumped, he had been badly burned.Severely injured in the fall as well, he died later that night at the hospital.