Dancing at the Galette

Continuing our walk up Rue Lepic in the Montmartre section of Paris, it is hard not to notice the two remaining windmills in an area where at one time there were many more. Several of these windmills  were owned by the Debray family. They turned an area that was a small farm, between two of the mills, into an outdoor terrace where popular dances were held on Sunday evenings in this working class neighborhood. 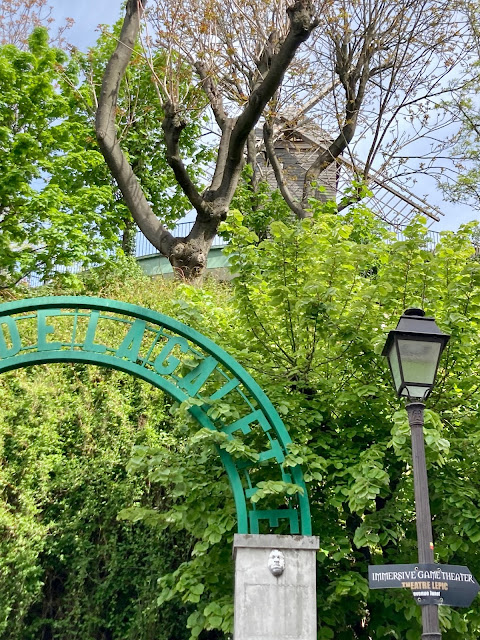 The first mill you spot is the Blue Fin. Sitting in its original location, but now behind gate on private property. 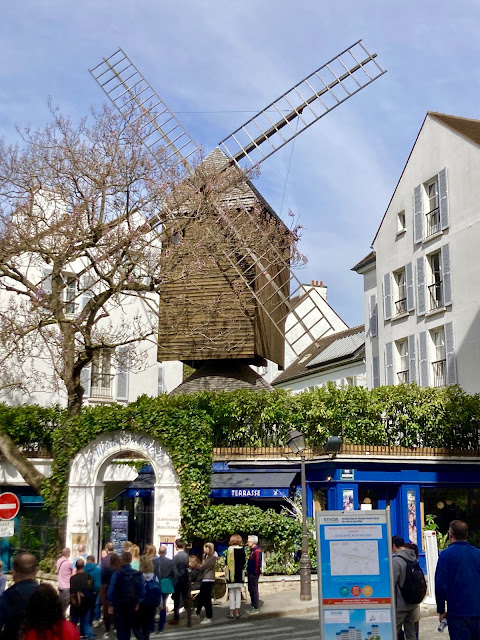 The other nearby mill is the Radet.It was actually side by side with the Blue Fin and was moved a short distance in 1924 to its present  location.  Today there is a restaurant at the base of the mill that the owners call the Galette. 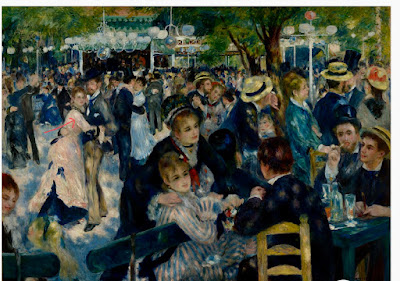 Dance at the Moulin de la Galette
Part of the reason these mills are so popular today is the above famous painting by Pierre-August Renoir .
What intrigues me about this painting, that now hangs in the Musee d'Orsay in Paris, is that they have no idea if it’s the original. You see Renoir painted two identical paintings. One large and a smaller one that was most recently owned by John Whitney President of the Modern Art Museum  in NY. It was then auctioned at Sothebys for a whopping 78 million in 1990 to a rather eccentric chairman of a manufacturing company in Japan. Mr. Saito declared that he would cremate the painting along with his body when he died. Although, when his company went bankrupt the painting was acquired by the bank. It is now in a private collection in Switzerland.
One other interesting fact. The young model that I have marked with a red arrow died of typhoid shortly after the painting was finished and Renoir paid for her funeral.
Sorry I get carried away when I find out something I think is interesting…Please return and we will get back on subject...our hike up Rue Lepic.
Posted by Janey and Co. at 8:33 AM