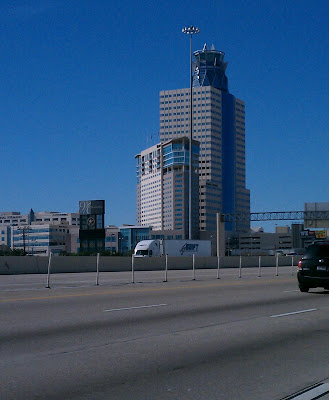 We had the most beautiful weather yesterday, so I went out to lunch with one of my dearest friends. Along the way, we passed a new hospital on the west freeway that has the dubious distinction of making the list of one of Houston's ugliest buildings. I wouldn't go that far in describing it, but it certainly is unusual. It's the "thing" on top that has people talking. It's bad enough that it looks like it doesn't belong there, but it is not even centered. I felt sure that the first time I saw it, that the building wasn't finished, but apparently it is.....So maybe that is the air conditioning equipment on top (after all it's Houston here)? No, I understand it houses the executive offices.