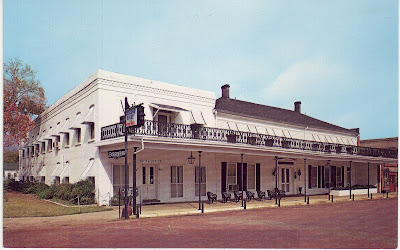 I found these postcards while pitching and tossing. They are of the Excelsior Hotel In Jefferson, Texas. Over the years we have gotten together, once a year, with my four sisters and their families for a weekend reunion. One year, we all met in the tiny east Texas town of Jefferson. Jefferson is full of old Victorian homes which have mostly been turned into Bed and Breakfasts. But, since we...all wanted to stay in the same place we chose this old hotel. Jefferson, by the way, is touted by many, to be the most haunted town in Texas....and this hotel is at the top of the list. More on that later. 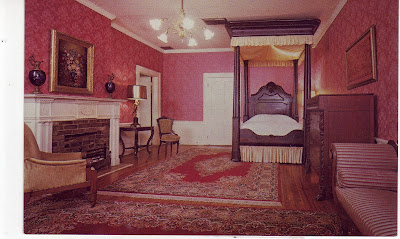 When we made our reservations, my Tom announced that we wanted the presidential suite. No argument out of me. Yes, there is one. Ulysses S. Grant and Rutherford B, Hayes ( both US Presidents) .. have stayed in this suite which consists of this room with the canopy bed and the adjoining double suite. I tried to find a picture of the six foot long bathtub (that I took) to no avail. Was it me that said I had organized my photos?!
Anyway, our two youngest daughters were still at home and would be going with us.
When the weekend arrived, one of our daughters had a commitment and Tom a business obligation, so Katy (our youngest) and I trekked off alone to meet my family. Katy's cousins loved it...and I ended up with four little girls sharing the adjoining double suite and me in the big canopied bed alone. Well. I didn't sleep a wink...I don't believe in haunted houses. But, something kept me awake and feeling uneasy ALL night! 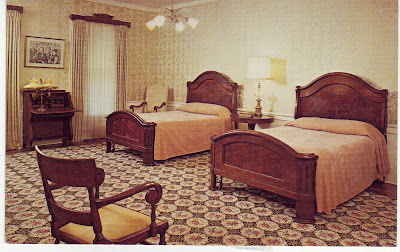 We took the hotel tour before checking in and were told several ghost stories. One in particular. Seems back in the early '70's prior to him filming Poltergeist. Steven Spielberg stayed in this hotel. He left in the middle of the night supposedly frightened by spirits. 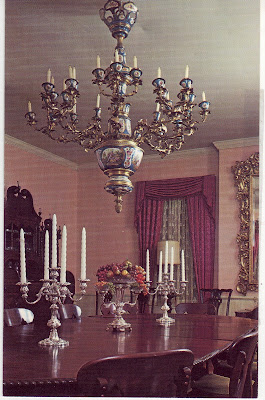 If you are brave enough to venture there, a very southern breakfast is part of the deal and  is served in the hotel dining room .. Me I don't think I want to sleep there (alone) again!